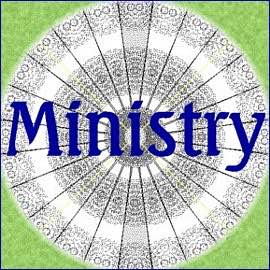 Everyone, even you, can be a minister for God. In other words everyone can serve God in some important way. Read this lesson to find out what it takes.

In this lesson, we ask the question, “What do I need in order to serve God effectively?” I've divided this lesson into three parts, which I've called “Ability, Opportunity, and Temerity”. You probably already realise that ability and opportunity are keys to ministry, but the third item, temerity, may come as some surprise.

Note:— Ministry is Being a Servant. Before we start talking about “ministry” I should point out that in the New Testament the idea of ministry is service and servanthood. Some served as leaders, and their leadership carried a measure of authority (Ephesians 4:11). However that authority is not reflected in the description “minister”. This description, in the New Testament, simply means servant and that's how we should understand ministry.

The first requirement for ministry is ability. You need some ability which you can develop to excellence and use to do good in your family, community, congregation, or in the wider world. God gives each of us different abilities so that we can serve him in different corners, “You in your small corner and I in mine”.

¶“10As each one has received a gift, use it to serve one another. [In this way you will be] good stewards of the many-sided grace of God. 11Whoever speaks should speak as do the oracles of God. Whoever serves should do so with a strong ability which God provides. In this way God shall be glorified in all things through Jesus Christ. To them belong the glory and the power for ages evermore.” (1Peter 4:10-11).

¶“4[Among the members of the body of Christ] there are different kinds of gifts, yet all gifts are given by one and the same Spirit. 5Members serve in different ways, yet they all serve one and the same Lord. 6They do all kinds of works, yet the same God works in all” (1Corinthians 12:4-6).

In the above texts, Peter and Paul send us a clear message that God bestows gifts or abilities on each one of his people. You have some “strong ability which God provides” and with this gift you should help others and thus serve God (1Peter 4:11).

Everybody uses their God-given abilities to serve others and to glorify God. Often they do this simply as a personal initiative, an individual ministry. Nevertheless it is still the “the work of the church”.

If you say that you have no strong ability, then you contradict God. He has suited you in some way to serve him well. Don't deny that gift. Rather, discover and appreciate that gift, and start using it with dedication. That is not only your right, but also your calling.

Tabitha was a Christian woman “full of good works and charitable deeds” (Acts 9:36-42). She got sick and died. Peter raised her to life again, but before that her weeping friends showed Peter the clothing she had made for the poor.

Tabitha had a “strong ability which God provides”. She recognised this gift and used it in dedicated service to others. Her friends acknowledged and valued Tabitha’s work.

Gaius was a friend of John. Gaius was another Christian who had a “strong ability which God provides”. He was able to offer hospitality to travelling preachers and to “send them forward on their journey” (3John 1:5-8). John says that people who do things like that are “fellow workers for the truth” (3John 1:8).

Paul was grateful for assistance in his work as an apostle. At one difficult period in Paul’s ministry, Christians in Philippi helped him. He says to them, “You shared in my distress... No other congregation shared with me in the matter of giving and receiving, except you alone” (Philippians 4:13-19). They too had a “strong ability which God provides”. They were able to serve Paul by getting aid to him in his time of need.

“Epaphras, who is one of you, a servant of Christ Jesus, greets you, always struggling on your behalf in his prayers, that you may stand mature and fully assured in all the will of God.” (Colossians 4:12 ESV).

This gentleman also had a “strong ability which God provides”. He could labour in prayer for the churches. The next verse tells us that he had a “great zeal” for the churches. He was a zealous man of prayer. That was his gift.

As well as having a gift or ability, you need an opportunity to use it. So now we'll think about that requirement.

¶“9Let us not grow tired of doing good. When the season comes, we will reap, provided we don't lose heart. 10 So, as every opportunity arises, let us do good to everyone, and especially to those who belong to God’s household of faith” (Galatians 6:9-10).

¶“2Be vigilant in prayer, earnest and thankful. 3Pray also for us, asking that God may open to us a door for the word. We need to speak to people [to explain] the mystery of Christ. For the sake of this [mission], I am in chains. 4I want to make the word clear. I want to speak it as I should.” (Colossians 4:2-4).

Paul found huge opportunities opened for him in Ephesus. He said, “I will extend my time in Ephesus, because a great and effective door has been opened for me” (1Corinthians 16:8-9).

As Paul said of one of his other missions, “I planted the seed, Apollos watered it, but God has been making it grow.” (1Corinthians 3:6).

Of course, we have times when opportunity is denied us. The doors are shut to us. There seems to be no fertile ground for planting. Our good works bear little fruit. The good word finds no listening ear. However, God is in control. If we ask him for opportunity, he will provide it. While we watch for it, we do the best we can.

We should always watch for opportunities, especially where we think they might arise. When Paul and his companions arrived in Philippi, they “went out of the city to the riverside where by custom there was a gathering for prayer.” (Acts 16:11-15).

Paul and the others sat down and spoke to the women who met by the riverside. They converted Lydia and her household. Had Paul and his companions not bothered to be informed about this meeting, and to attend it, they would have missed an opportunity which God provided.

But that's not all. Lydia herself saw an opportunity to serve Paul and his companions, and she was eager to do so: “If you have judged me to be faithful to the Lord, come to my house and stay” (Acts 16:15).

Paul in the Synagogues

When Paul and Silas went to Thessalonica, “Paul, as his custom was, went in to them [in the synagogue], and on three Sabbaths he reasoned with them from the Scriptures” (Acts 17:1-4).

Paul had credentials and skills that could allow him to enter the synagogues and be invited to speak. Although he was an apostle to the Gentiles, he would first look for an opportunity in the synagogue. There he might find fertile soil among Jews and also among Gentile proselytes.

¶“11For the grace of God has appeared, bringing salvation for all people. 12Grace teaches us to renounce ungodliness and worldly passions, and to live a sensible, upright, and godly life in the present age” (Titus 2:11-12).

¶“13[Grace teaches us] to look for that happy hope of the glorious appearing of our great God and Saviour Jesus Christ. 14He gave himself for us, to redeem us from every lawless deed. Thus he purified for himself a special people who are zealous for good deeds” (Titus 2:13-14).

¶“15Speak out on these things. Exhort and rebuke with all authority. Don't let anyone disregard you.” (Titus 2:13-15).

Paul says to Titus (Titus 2:11-15 above) that God’s grace, and Christ’s cross, produced a special people destined for glory with Christ. They are a people who have renounced ungodliness and become zealous for good works. Those words renounced and zealous are strong words. They express daring, boldness, courage, and temerity.

We minister to people in need, whether their needs are related to this world, or the next, or both. That sounds quite cosy, until you realise that your ministry attracts opposition from Satan. He hates your doing good. You make him furious. His armies attack you. As Paul said to the Ephesians, (Ephesians 6:10-13 above), you must battle against the powers of darkness. That takes temerity.

As the proverb says, “The wicked run away when no one is chasing them, but the godly are as bold as lions.” (Proverbs 28:1).

¶“42It was evening on the 'day of Preparation', which is the day before the Sabbath. 43Joseph of Arimathea, was a respected member of the Sanhedrin, a man who was looking for the kingdom of God. He boldly went to Pilate and asked for the body of Jesus. 44Pilate was surprised to hear that Jesus was already dead. So Pilate summoned the centurion, to confirm the death. 45The centurion confirmed that Jesus was indeed dead, so Pilate granted the corpse to Joseph. 46Joseph then brought a linen shroud. He took Jesus down, wrapped him in the linen shroud, and laid him in a tomb. This tomb was hollowed out of the rock. Joseph rolled a stone against the entrance of the tomb. 47Mary Magdalene and Mary the mother of Joses observed where Jesus was laid” (Mark 15:42-47).

The good deed that Joseph did for Jesus, burying him with dignity, was a dangerous deed. Joseph had position and respect, as a member of the Sanhedrin. However that did not guarantee that an audience with Pontius Pilate, the Roman prefect, was safe. Nor did it guarantee that Joseph would not make the Sanhedrin angry against him. But he had the boldness, the temerity, to do this service to Jesus. We need to be like Joseph.