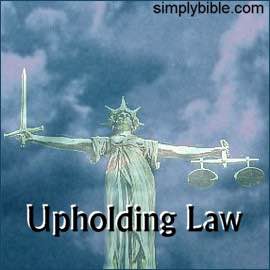 Law and Sin Inherent
—The Sin of Adam

This is the first of three lessons that examine the relationship between sin and divine law.

In this lesson we consider the following verses...

In these verses and their context, Paul is stating a principle that is easy to understand. However, this apparently simple and easily understood principle is often misunderstood. Some people take the view that anything against which there is no law should be regarded as lawful, and anything that is lawful should be regarded as right. In this lesson we shall see that this is not true.

1 The Sin of Adam

In order to sin, one must be in disregard of, or in disobedience to, a law that God has put in force. John says, "sin is lawlessness" and he uses these words in the sense of a transgression of God’s law (1John 3:4).

Take, for example, the first sin committed by mankind. If God had not made an exception about trees for food, and said of one tree, "You shall not eat", then Adam and Eve would not have sinned by eating from that tree (Genesis 2:16-17, 3:2-3,11). So we see a plain principle at work here...

Sin was imputed to Adam because there was a law in force to prohibit what he did, and that made it a sin.

Now we begin to examine whether all sin is according to the above principle, or whether it is possible to sin in a different way to Adam. Having noted the nature of Adam's sin, we might hastily conclude that all sin is similar, and unless God makes a specific law about a matter, as he did in Adam's case, then there can be no sin in regard to that matter.

However, in the verses with which we begain this lesson, Paul does not say such a thing, nor does he agree with that view.

Before Paul says, "Sin is not imputed where there is no law" he prefaces it by saying, "Sin was in the world" (Romans 5:13). Paul does not say that there was no sin. He rather says that there was sin.

After Paul says,"Sin is not imputed where there is no law", he then qualifies the statement by saying, "Nevertheless death reigned from Adam until Moses, even over those who had not sinned in the likeness of Adam's transgression" (Romans 5:13).

Even people who had not violated a law or commandment like Adam, still had sin, and so death reigned over them (Romans 5:12-14).

That may seem contradictory right now, but it will become clearer as our lesson progresses.

To explain why a person is regarded as sinning, even though not in the similitude of Adam's sin, we must now introduce a second principle, namely that some things are inherently wrong.

This second principle was not evident in Adam's transgression. Eating fruit from a tree is not inherently wrong. It can only be wrong if a law is in force that prohibits it.

However, not all acts are like that. There are things which are wrong in themselves. They don't need a law against them to make them wrong. We see then, this second principle...

Paul himself says that though a plethora of things are lawful, they are not all good (1Corinthians 6:12, 1Corinthians 10:23).

Perhaps we can illustrate this principle with examples from civil law...

Paul understood that sin was inherent (but not inherited) in the lives of people who were without law, even though their sin was not imputed. Paul says that "God overlooked the times of this ignorance" (Acts 17:30).

Ignorance does not make bad things good. God overlooked some people's wrongdoing and did not impute the wrong to them. Nevertheless, God still saw those people as doing the wrong thing.

Whilst it is true that "sin is not imputed when there is no law" nevertheless it is still sin, and the fact that a wrong is not imputed does not make it right.