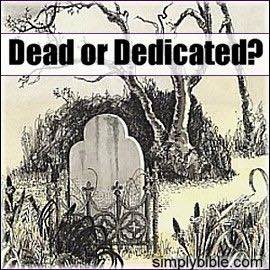 Is That “Dead” Church Really Dead?
—Judging by appearances

Someone will visit a small struggling church, notice the empty seats and the lacklustre worship, and pronounce that church dead. But is it dead?

There are at least eight factors that can make a church seem dead when really it is alive. When you take into account these eight “struggle factors” you will see that the church pronounced “dead” is dedicated, and not dead at all.

A church that has existed for several decades will have lost many of its faithful members through death. Those "who have fallen asleep in Jesus" (1Thessalonians 4:14) still count as members although no longer seen.

When a faithful Christian passes away, those who knew and remember that disciple will be strengthened by that memory, and keep it alive. Others will see only a vacant seat.

Sickness and disability are a fact of life. "Trophimus I left at Miletus sick" (2Timothy 4:20). Trophimus, though sick, and unable to do the Lord’s work, was still a faithful and valued disciple.

The sick and disabled, and their carers, may not be able to do the Lord’s work as much as they would wish. Those who know them sympathise. Others only see the church work that isn't getting done.

Members of the church at Jerusalem "were all scattered throughout the regions of Judea and Samaria, except the apostles" (Acts 8:2). But they remained faithful, and through them the church had influence abroad.

Some churches can count more faithful members who have gone to other places, than those who remain. Yet a newcomer will make a judgment only on what remains.

"Many of his disciples withdrew, and were not walking with him anymore" (John 6:66). That wasn't the fault of Jesus; nor, when people drop out of the church, is it necessarily the church’s fault.

People sometimes measure a church by the number of dropouts it has, rather than by the faithfulness of those who, though disappointed, remain steadfast and continue to walk with the Lord.

"Concerning this sect, it is known to us that it is spoken against everywhere" (Acts 28:22). The Jewish leaders who said this, however, were keeping an open mind.

Some people judge a church by what its detractors say, rather than observing the church for themselves in a fair and spiritual manner.

"We wanted to come to you, I Paul more than once, but Satan hindered us" (1Thessalonians 2:17-18). Satan is always trying to thwart and distract us from attending to the Lord’s work. Sometimes, through no fault of ours, he succeeds.

Some people understand this. Others take no account of Satan’s hindrances, and blame the church when things don't get done.

On the other hand, good things do get done. In spite of Satan, a church’s members may be "rich in good deeds, generous and ready to share, storing up for themselves the treasure of a good foundation for the future..." (1Timothy 6:18-19).

These good things, however, may be done out of view, and without sounding a trumpet. People who judge the church to be dead, may be unaware of the good being done by that church.

Paul said of Israel, "They have a zeal of God, but not according to knowledge (Romans 10:2). Unfortunately, this is also true of many professing Christians today.

We don't share their zeal for false doctrine and crowd pleasing. We are a minority remaining steadfast in the truth. For that, some will judge us as being a dead church.