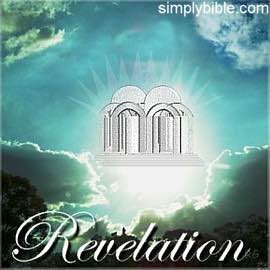 The climax of the book of Revelation is the vision of the heavenly Jerusalem, a jewelled city of light. This beautiful vision signifies the church, the called out people of our Lord Jesus Christ, in all her eternal glory.

The city's light "Her light was like a most precious stone" (Revelation 21:11).

"The city has no need for the sun or moon to shine. The very glory of God lighted it, and its lamp is the Lamb." (Revelation 21:23).

These facts about the light show us that this vision does not represent any place on earth, because there is neither sun nor moon nor night time, but only the eternal light of the glory of God. This is a heavenly city, not an earthly one.

"The twelve gates were twelve pearls. Each one of the gates was made of one pearl." (Revelation 21:21).

The open gates face in four directions, open to every tribe and nation. The names of the twelve tribes of Israel represent all God’s people who are of the true spiritual Israel rather than the Israel of the flesh (Romans 9:6,8).

"The gates will never be closed." (Revelation 21:25). However nobody can approach these gates unless they serve the King of Glory (Psalm 24).

The city’s foundations "The wall of the city had twelve foundations. On the foundations were twelve names —the names of the twelve Apostles of the Lamb" (Revelation 21:14).

"The foundations of the city’s wall were adorned with all kinds of precious stones" (Revelation 21:19-20).

In speaking of the church, Paul said that it has been "built upon the foundation of the apostles and prophets, Jesus Christ himself being the chief cornerstone" (Ephesians 2:20).

The city's jewells "The first foundation was jasper. The second was sapphire. The third was chalcedony. The fourth was emerald. The fifth was sardonyx. The sixth was sardius. The seventh was chrysolite. The eighth was beryl. The ninth was topaz. The tenth was chrysoprasus. The eleventh was jacinth. The twelfth was amethyst." (Revelation 21:19-20).

There's something interesting about the jewells in the foundation stones. Half of them are mentioned among the twelve jewells on the breastpiece of judgment worn by Aaron the priest (Exodus 28:1-2,15-21).

Christ is our great High Priest (Hebrews 9:11-14). His precious blood purchased every soul that enters the city of God. Perhaps we can see the jewells in the city as representing this.

The city's measure "He who spoke with me had a golden reed to measure the city, its gates, and its walls. The city lies foursquare, and its length is as great as its breadth. He measured the city with the reed: 12,000 stadia long, wide, and high equally. Its wall is 144 cubits by human measure and used by the angel" (Revelation 21:15-17).

The fact that the city could be measured in earthly units of length has the same significance as the fact that it was made of earthly minerals and metals, and had earthly names. It does not mean it's an earthly city, but a heavenly city in which the saved of earth are welcome.

The city's inhabitants "The nations will walk in its light. The kings of the earth bring the glory and honor of the nations into it" (Revelation 21:24,26).

"There will by no means enter into it anything profane, or one who causes an abomination or a lie, but only those who are written in the Lamb’s book of life" (Revelation 21:27).

When we go to heaven, we won't need a moving van. We can take nothing into heaven from this world except glory and honour. Injustice and corruption cannot go in, nor can anyone —king or commoner— who practises evil.

The city's temple "I did not see a temple in the city, for the Lord God, the Almighty, and the Lamb, are its temple" (Revelation 21:22).

The church of Christ, his called out people, have never needed a temple in which to worship and draw near to God. The first church used the temple in Jerusalem, but not its altar and holy places (Acts 2:42-47 esp v46).

The other churches met for worship wherever was convenient. They needed no holy place on holy ground. They needed only holy hearts and holy lives made so by Jesus. They, he, and God were the temple (Ephesians 2:18-22). So it is today. So it will be in heaven.