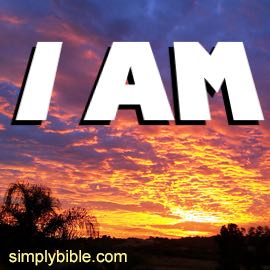 In the time of Moses, God called himself “I AM WHO I AM”. And, 2000 years ago, Jesus applied the name “I AM” to Himself. Today, many in our society appropriate this name for themselves, as seen in the promotion for the Invictus Games.

In October 2018, Sydney Australia will, God willing, host the Invictus Games. Prince Harry, who founded the Invictus Games, will be here with his wife whom he married earlier this year in a splendid royal wedding. At the time of writing this article, Australia is quite excited by the coming games and royal visit.

Following a visit in 2013 to the US‑based Warrior Games for injured military veterans, Prince Harry was inspired to found a world‑wide games of that sort. The first Invictus Games took place in London in Autumn 2014. The Invictus Games give disabled soldiers a means of showing the world (and themselves) that, although wounded, they are not defeated. The word invictus is Latin for “unconquered”.

A Matter For Concern

In the lesson below we notice a dark side to the event, seen behind its logo and motto. The Logo places the two words INVICTUS GAMES in such a way that the words I AM are embedded and highlighted. The following is not a copy of the logo, but suggests the idea.

The logo would catch the eye of any Bible student, because in the Bible “I AM” is one of the names of God. That's not the intention of the logo, however, so the Bible student might just take it as a curious coincidence. However, looking at the origins of the logo, and the motto that goes with it, there is reason for concern.

But let's first take a brief look at the words “I AM” in the Bible, then we will look at the background to their use in the Invictus Games motto.

The name “I AM” is found in Moses’s encounter with God at the burning bush (Exodus 3:1-17). Moses enquires of God what he is to say to the Israelites, when they ask which god was it that sent him to them. Yahweh answers, "I am who I am," adding, "Say this to the people of Israel, 'I AM has sent me to you.'" (Exodus 3:14)

This name is an affirmation that God exists, just as he has always existed, and always will. Furthermore, he will do what he promises and plans. Our own existence is altogether because of God. Humanity lives, in every generation, wholly dependent upon God the Creator.

God is the great “I AM” not only in the moment he speaks to Moses, but in every moment before and since. "Even from everlasting to everlasting, you are God" (Psalm 90:2).

In response to the Pharisees’ question "Who do you think you are?" Jesus said, "Your father Abraham rejoiced to see my day; he saw it and was glad." The Jews said to him,"You are not yet fifty years old —and you have seen Abraham?" Jesus answered, "I tell you the truth: before Abraham was, I am!" At this, they picked up stones to kill him, but Jesus hid himself, slipping away from the temple grounds" (John 8:53–59).

The violent response to Jesus, when he used the words “I AM”, shows that they clearly understood what He was saying —that he is the eternal God, and one with the God who spoke to Moses!

At the beginning of the Book of Revelation we read this declaration: "'I am the Alpha and the Omega,' says the Lord God, 'who is, and who was, and who is to come, the Almighty.'" (Revelation 1:8). At the end of the book, Jesus says, "'I am the Alpha and the Omega, the Beginning and the End, the First and the Last (Revelation 22:13). These are further instances of the words “I AM” applied to Jesus.

Now we come back to the Invictus Games and its “I AM” motto.

The “inspiration” for the logo and motto is the poem Invictus, by William Ernest Henley (1849–1903). Henley was an atheist possibly leaning toward agnostic. He suffered much, but his only hope amid the “bludgeonings of chance” was himself. The closest he comes to acknowledging a higher being are his lines, “I thank whatever gods may be For my unconquerable soul.” So his last verse goes...

It matters not how strait the gate,
How charged with punishments the scroll,
I am the master of my fate,
I am the captain of my soul.

That is the background of the Invictus Games motto. The great worry here is human pride rather than the spirit God requires. "He has shown you, O mortal, what is good. And what does the LORD require: To act justly and to love mercy and to walk humbly with your God." (Micah 6:8)

To say we are Masters of our fate and captains of our soul is arrogance —whereas to acknowledge in our struggles and aspirations that "The Lord is my Helper" is wisdom (Hebrews 13:6).

The devil finds a way to corrupt what is good. The Invictus Games are good, but bad, very bad, is the subtle intrusion of humanist doctrine into the promotion of the games —that people are their own gods.

According to the Bible, Jesus Christ is "the Captain of our Salvation" (Hebrews 2:10) and the one we should call Master. "For certain people have crept in unnoticed who long ago were designated for this condemnation, ungodly people, who pervert the grace of our God into sensuality and deny our only Master and Lord, Jesus Christ (Jude 1:4).

Strong words there from Jude, but when you say, “I am the Master of my fate” have you not denied your Master and Saviour, the Lord Jesus Christ?

I hope I have given you some food for thought. May the soldiers who compete in the games say humbly...

INVICTUS
GAMES
MAKES ME
A VICTOR!