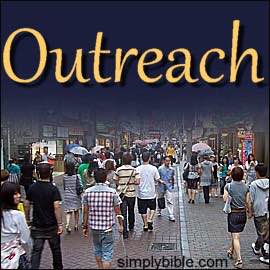 The Closing
—The fifth step in outreach

The fifth step in the soul winning process happens when a person makes a decision to change his beliefs and ways. You bring the person into line with God's word which has shown the person’s error.

When one makes that decision known, the matter is considered closed on the assumption that the decision will take immediate effect in the form of appropriate action. So finally, let us consider this fifth step, the Closing.

There are three points to make about the Closing...

1 It's A Happy Moment

Although the word of God cuts to the heart, its acceptance is made with gladness, not with peevishness (Acts 2:37,41 KJV). Making and effecting a decision to obey God, one is caused to go "on his way rejoicing" (Acts 8:39).

Where the decision is made reluctantly, with the minimum action as a result, the person has probably been pushed into it by the power of the teacher's personality and the pressure of the group, instead of the power of God's word. That is not a closing. That's a bulldozing! When a true closing is made, the result is joy.

2 It's a Bonding Moment

One of the effects of achieving the closing, is that a bond is forged between all those who have participated. When Paul helped Onesimus, the runaway slave, to correct his ways, the bonding was so strong that Paul spoke of Onesimus as his son begotten in the gospel (Philemon 1:10,16). Isn't that lovely?

Where relationships are strained and estranged, it is often because the process we have been discussing is not going on, and the closing is being thwarted. Errors are not being resolved, so the bonds remain weak. Where people submit to the soul winning process, even to its unsettling and closing, the yield is stronger fellowship, the people involved "having been knit together in love" (Colossians 2:2).

3 It's A Moment Of Beginning

That might sound strange. The closing, the last step in the process, described as a beginning? Let me explain...

Always keep in mind that the outreach process is not linear, but cyclic. This is the secret of the soul winning process. It goes on and on, over and over, as we mature in Christ. It isn't something that happens once at conversion. It is a constant process of renewal and change.

The process doesn't stop at the closing, but proceeds to one of the earlier steps, so that the process constantly builds people up and ensures spiritual development and improvement.

It's like the people who are always painting the Sydney Harbour Bridge. When they get to one end, they find it is already high time to go back and start at the beginning again with a new coat of paint.

When we achieve a closing, we don't write "The End." No, we go back to the reassuring, even further back if need be, and continue the cycle.

The soul winning process is not a journey travelled but once. It is a round where each stop is visited cyclically. I suppose that we should think of the journey not as a flat circle, but as a gradually ascending spiral. For although we go round and round, we do get somewhere, and we do go higher and higher.

Here is another literary gem for you, since you enjoyed the story of Dick and Molly so much! Use this story to help you consider the outreach process that we have been learning about. Discuss whether Peter did well or made mistakes.

The loudspeaker says the six ten train to Frankston has been cancelled. Bob mutters something derogatory about the railways.

Sitting next to him, is Peter, who is a Christian.

Peter has learned to take these annoyances in his stride. But he treats what Bob has said as a remark addressed to him, although Bob is a stranger who could have been addressing the world in general.

"It reminds me," replied Peter, "Of the time I was on a train which stopped just inches short of some powerful explosives which schoolboys had stolen and placed on the line.

"The train driver saved lives, possibly mine, by having his wits about him.

"He told the newspaper reporter that God had helped him stop the train. We could use more train drivers like him, eh?"