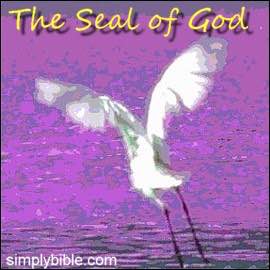 Our lessons on the Seal of God cover 17 principles about the promise, oath, and seal. These principles are listed below.

Online, each principle is linked to the lesson that treats of it in detail.

Each principle is linked to the lesson that treats of it in detail. Tap any title next to an arrow below.

➤ 1. God Made a Promise. We start with something we all find fairly easy to understand: the promise of God. In Ephesians 1:13-14, the Holy Spirit is called the "Holy Spirit of promise". For many centuries before Jesus was born, God had been making repeated promises about a Son who would bless the whole world with the way of salvation and peace. For example God made the promise to Abraham after the binding of Isaac on the altar (Genesis 22:15-18).

➤ 2. God's promise was confirmed by God’s oath. Although God”s promise is immutable (certain and unchangeable), nevertheless God has seen fit to confirm his promise with an oath (Hebrews 6:13-15).

➤ 3. God's promise is guaranteed by God’s seal. Paul says that God’s promises are “yes” and “Amen”. That is to say, God's promises are affirmed and true on their own. When God makes a promise, it is impossible for God to lie. The promise by itself would have done. Yet, as we have seen, God wanted to guarantee his promise with an oath. But there's more! God has seen fit to further confirm and guarantee his promise with a seal (2Corinthians 1:20-22).

➤ 4. God's oath was sworn to all the World. This assurance is for all the world. Jesus, the promised seed, gave the great commission to take the gospel "into all the world" (Mark 16:14-16). Paul records that this was accomplished (Colossians 1:3-8).

➤ 5. God’s seal is for all who believe. Since God’s oath has been sworn to all the world, we would expect that his seal would be given to all who believe. Since the oath is ongoing, so is the seal. If the heirs of God have God’s oath as a guarantee of their inheritance, why would they not also have God’s seal as their further guarantee? So we are not surprised to read that God has, without exception, given the Holy Spirit "to those who obey him" (Acts 5:32).

➤ 6. The number of sealed equals the number of saved. In visions given to John, the people who were sealed were no fewer, and none other, than all the saved. The seal of the living God, the gift of the Holy Spirit, is for all Christians (Revelation 7:1-17).

➤ 7. All who are in Christ are sealed. There is a conclusive way to make the point that God has sealed every Christian. Take a close look at the “in hims” of Ephesians chapter one. The Seal of God is one of those “in hims” (Ephesians 1:3-14).

➤ 8. The oath is distinct from the Seal. The Christian’s threefold assurance is God’s promise, oath, and seal. These are distinct. The oath and the seal are not one and the same thing, but different blessings. For example, it was "after listening to the message" and "having believed" that the sealing took place . If the word of the oath and the seal of the Spirit are the same, then the people would have been sealed while listening to that word, not after (Ephesians 1:13).

➤ 9. The seal is distinct from miraculous gifts. Paul says "not all" have certain gifts. Yet he says God works his diversity of gifts "in all" and "to each one". Paul is not contradicting himself. All Christians have the Holy Spirit working in them, imparting gifts to them, sealing them. But that is distinct from certain special miraculous gifts which were given only to some, "not all" (1Corinthians 12:4-11,28-30).

➤ 10. The seal is the indwelling of the Holy Spirit. The gift, renewing, outpouring, indwelling, and seal of the Spirit are all terms for the same blessing of the Spirit, namely that unbreakable seal which God added to his promise and his oath. This indwelling is enjoyed by all Christians. Paul says that we have life from Christ only "if indeed the Spirit of God dwells in you" (Romans 8:5-17).

➤ 11. The Spirit works with the word. God communicates with us through his word, and we communicate with God through prayer. Everything that the Bible says about the gift, work, and seal of the Spirit, the Bible also attributes to Bible study and prayer. As one of many examples, we are sanctified by the Spirit (1Corinthians 6:11) and sanctified by the word (John 17:17).

➤ 13. The seal cannot be broken. The seal of God is an invincible blessing. No power in the universe, not even the mighty hand of Satan, can break the seal of God. No temptation is able to overpower God’s own (1Corinthians 10:12-13). They are secure in the hand of the good Shepherd who gives them eternal life (John 10:14,27-29). Nothing can separate them from God’s love (Romans 8:35-39).

➤ 14. The seal of God is conditional. The security of the seal of God ensures that we cannot be forced to part from Christ (Romans 8:35-39). Yet neither does God force us to remain in Christ. You are saved "if you continue in the faith" (Colossians 1:23). The promise, oath, and seal of God absolutely guarantee you can do that if you want to.

➤ 15. All the saints are sealed. Jesus spoke of his sheep (his way of referring to his saints) in these reassuring words: "I know my sheep, and am known by my own. My Father has given them to me... and no one is able to snatch them out of my hand" (John 10:14,29). Every sheep in his sheepfold is given that guarantee.

➤ 16. Only saints are sealed. The world is really divided into two groups: saints and enemies. The saints are those who by God’s grace have been saved and sealed from God’s wrath; but the enemies face destruction. The thing that makes you a saint in grace is believing and living by the gospel of Christ. Anyone can do that, but only those who do, will receive the seal of God (2Thessalonians 1:3-12).