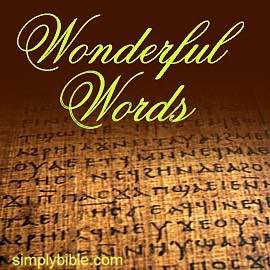 We all "have sinned and fall short of the glory of God" (Romans 3:23). God’s standard of perfect righteousness cannot be lowered. So how can we be made acceptable to him? God will accept a sacrifice that covers our shortfall. However, that raises a problem.

This problem concerning sacrifice is by no means perceived by everybody. People today can be just as confused about sacrifices as were those who thought their animal sacrifices could be sufficient, and failed to understand that those sacrifices were only tokens of the perfect sacrifice which had to be found (Hebrews 10:3-4).

So when we say the solution to our shortfall is sacrifice, all we have really done is shift the problem along a bit. God demanded perfect righteousness. We could not give him that, so he demanded a perfect sacrifice instead. But we could not provide that either.

It's a lovely thought that God would accept a sacrifice in our stead, and deem us righteous by virtue of that sacrifice. But our shortfall cannot be transferred to a sacrifice that itself falls short. So where on earth do we find a sacrifice that is perfect and doesn't fall short?

God long ago anticipated that obstacle. God himself could provide a perfect sacrifice for us. He could see no reason why he should reject a sacrifice just because it was from himself, not from us. What mattered was that it be perfect. It's sufficiency did not consist in our providing it. So God could solve the problem, without compromising his standard, by providing the sacrifice himself for us.

But this, too, turned out to be a lovely idea that in reality only shifted the problem along a bit more. God could provide a sacrifice, but there was a catch. God did not have a lot of options.

God did not have some sort of temple storehouse packed full of unused perfect sacrifices, one of which he could select for the people of planet earth. He is not some celestial god playing at legal conundrums. He is the one true God with one perfect standard.

3 God’s One and Only Option

The reality was that God had only one thing that he could offer sufficient to satisfy his standard. As a matter of fact, "thing" is not the right word. It was a Person; the person most special to God of all —God’s Son, the one and only Son he had. Nothing less than the sacrifice of God’s only Son would do.

The question remained, however, as to how this could be accomplished. The ramifications of all this are becoming too great for me, and I imagine for you too. We have followed the story to a point where we cannot fully understand God’s reasoning. Fortunately we don't have to. God understood, and he brought about what was necessary.

"God made him who knew no sin to be sin for us, that we might become the righteousness of God in Him" (2Corinthians 5:21).

What, then, did the wise God ordain? What should be done to accomplish the sufficient sacrifice?