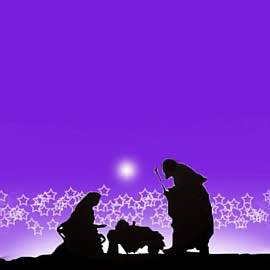 The Birth of Jesus
—The miracle of the virgin birth

Mary was betrothed to Joseph. Before they came together she was found to be with child by the Holy Spirit. Joseph took her as his wife, and kept her a virgin until she gave birth to her firstborn son.

1 The Virgin Birth Is a True Story

Matthew and Luke tell story of Christ's birth as fact. Millions of people believe it around the world, in every generation throughout the Christian age.

Some professing Christians, however, do not believe in anything miraculous or supernatural. They are like the Sadducees among the religious leaders of Jesus's day. Pharisees believed in the supernatural, but the Sadducees did not (Acts 23:8). Some people today won't accept the virgin birth of Jesus as a real event.

The supernatural is woven inextricably into the whole Bible story —especially the story of Christ Jesus, his virgin birth, his signs and wonders, his resurrection from the dead, his ascension into heaven, his sending the Holy Spirit.

All must be rejected if the supernatural and miraculous is rejected. Taking the supernatural element out of the story of the Bible, is like taking the thread out of a garment. You undo the entire garment except for a handful of buttons.

The gospel nativity bears no resemblance to myth. Were it written that Mary picked a pumpkin and found the baby Jesus inside, then well might we think we are reading a myth.

The account, however, is straight forward and contains none of the trappings of fables. The story’s extraordinary point is that Mary was a virgin when she conceived, and was still a virgin when she gave birth.

This, and the rest of the story, is presented as straight facts and real events among real people. The account bears no resemblance to the myths of the Greek and Roman gods or the unscriptural Jewish fables.

Myths, fables, and legends, are written not to embody great truths, but to make a hero out of one who, in real life, falls short of the ideal. If faith in Jesus requires myth or legend to bolster it, then it is a vain faith, because the real Jesus, stripped of the legend and myth, becomes just another Ned Kelly, Robin Hood, or Davy Crockett.

Peter testifies, "We did not follow cleverly devised tales when we made known to you the power and coming of our Lord Jesus Christ, but we were eye witnesses of his majesty..." —a clear, evidential denial that Christ is a myth (2Peter 1:16).

The virgin birth was to be a "sign" from God (Isaiah 7:14). A birth in the ordinary course of nature is not a sign.

As wonderful as it may be, human procreation occurs every minute of every day. If Jesus's birth were an ordinary natural event, how would it be a sign of anything? On the other hand, if the mother had conceived being a virgin, and was still a virgin when she gave birth, then that would indeed be a sign.

Matthew is clear that Joseph kept Mary a virgin until she gave birth to Jesus (Matthew 1:24-25). That fact makes the birth of Jesus a sign, and Jesus the unique son of God in whom we should believe (John 3:16).

In some translations the word "almah" in Hebrew is rendered "maiden" or "young woman" rather than "virgin" (Isaiah 7:14). It is hardly a sign that a young woman conceives in the normal way. However, the inspired translation (Matthew 1:23) has the Greek word for "virgin" —the Holy Spirit settles the matter.

The scriptures report some as saying that Jesus was Joseph's son. For example, Philip did (John 1:45). Even Mary once said to Jesus, "Your father and I have been worried and looking for you" (Luke 2:48).

In ordinary life, many fathers and sons are related legally, morally, and socially, but not biologically. They are properly called fathers and sons. Jesus’s relationship to Joseph is treated in this ordinary way.

Of course the birth records would be expected to show some indication of the non-biological relationship. Notice how the genealogies of Jesus studiously avoid calling Jesus the son of Joseph...

We see, then, that in ordinary statements Jesus is properly spoken of as the son of Joseph, but in legal statements he is not acknowledged as the biological son of Joseph, nor is Joseph said to have begotten Jesus.

Furthermore, in theological statements, Jesus is said to be "the Son of God" (eg John 3:16, John 20:30-31). We see, then, that the Bible exhibits appropriate language in each context, leaving no indication of a developing mythology about the birth of Jesus.

Silence of the Epistles

Some worry that the rest of the New Testament is “silent” on the virgin birth. Silence does not amount to invalidation. Paul acknowledges the writings of both Matthew and Luke as scripture, because he quotes passages from them as such (1Timothy 5:18, Matthew 10:10, Luke 10:7).

Why then should we think that Paul would not accept the accounts of Jesus's birth, in the writings of Matthew and Luke, also as scripture, and therefore just as true as any other scripture?

But is the rest of the New Testament really silent about the virgin birth? Whenever it uses the term "the Son of God", it implies agreement with the reason that Gabriel gave for calling Jesus "the Son of God".

Mary pointed out to the angel that she was a virgin, that she had not known a man carnally.

The angel, in tacit acceptance of Mary’s claim, replied, "The Holy Spirit will come upon you, and the power of the Most High will overshadow you, and for that reason the holy offspring shall be called the Son of God" (Luke 1:34-35).

This promise by Gabriel forms the theological basis for calling Jesus "the Son of God" and loads that title with the implication of divine conception and virgin birth.

The assertion that the New Testament is largely "silent on the virgin birth" is therefore mistaken, since repeated use of the title "the Son of God" acknowledges that Christ was conceived and born of a virgin by the power of God.