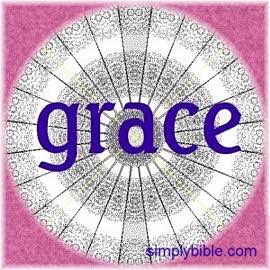 The story of Naaman the leper, in 2Kings chapter 5, has some important lessons for us about God’s grace: Grace cannot be dictated; grace cannot be repaid; grace must be obeyed. If we contradict any of those principles we don't understand true grace.

First I will tell the story of Naaman the leper. Then we will examine the three principles it teaches about grace.

Naaman was captain of the king’s army of Syria. In the eyes of the king, Naaman was a great man. The king trusted him because the Lord God had given victory to Syria by Naaman’s strength and bravery. Sadly, however, Naaman suffered from leprosy.

When Syrian bands raided the land of Israel, a little maiden was among the captives and now she waited upon Naaman’s wife. The girl said to her, “How I wish that my lord the king could go to the prophet of Samaria who would heal his leprosy!”

Someone repeated her words to the king who then commanded Naaman, “Take this letter to the king of Israel.” Naaman did so, and took with him ten talents of silver, 6000 pieces of gold, and ten changes of clothing as gifts.

The letter said, “I have sent Naaman my servant to you, so you may heal him of his leprosy.” Reading this, the king of Israel got so upset that he tore his clothes and cried, “Am I God, who kills and brings to life, that this man sends me his servant to heal of leprosy? Don't you see, the king of Syria wants to quarrel with me!”

Elisha, the man of God, heard this. He dispatched a message to the king: “"Why have you torn your clothes? Send the servant to me; he'll soon know that there is indeed a prophet in Israel.” So Naaman arrived with his horses and chariots, and stood at the door of Elisha’s house.

Elisha sent a messenger out to tell Naaman “Go and wash in the Jordan seven times, and your flesh will be restored. You will be clean.” That made Naaman angry. He said, “I thought the prophet would come out to me, stand on ceremony, call on his God, and pass his hand over my leprosy to heal me. As for the Jordan, aren't Abanah and Pharpar, our rivers in Damascus, better for me to bathe in and be clean?”

So Naaman turned away in a rage. However, his servants came up to him, and one said, “My father, if the prophet had asked some great thing, wouldn't you have done it? Why refuse to do a little thing and simply wash, and be clean?” So Naaman went down, and dipped seven times in the Jordan, just as the man of God had said. Naaman’s flesh became like the flesh of a child, and he was clean.

Naaman, with all his company, returned to the man of God and stood before him. Naaman said to the prophet, “I know that there is no true God in all the earth except the God of Israel. Will you please take a gift from me your servant.” But Elisha said, “As the Lord God lives and I stand before him, I will accept no gift.” Naaman again urged Elisha to take the gift but he refused.

Naaman said, “Well then, may I take two mule carts of earth home with me to make an altar to your God? I will never sacrifice to other gods again. And may God pardon me in one matter. When my king goes into the house of Rimmon to worship there, he leans on my hand, and I bow myself in the house of Rimmon. May I be pardoned in this?” The prophet replied, "Yes, go in peace". So Naaman departed.

Naaman had not gone far when he saw someone running after him. It was Gehazi the servant of Elisha. Gehazi had said, “Look here, my master has let this Syrian keep the gifts he brought. As the Lord God lives, I'll run after him, and get something from him.”

As Gehazai ran up, Naaman got down from the chariot to meet him. He asked if all was well. Gehazi said, “Yes, all is well, but my master has sent me to tell you that two young men, sons of the prophets, have come from the hill country of Ephraim. They need a talent of silver and two changes of clothing.”

Naaman said, “"Oh certainly! Please —take two talents!” He bound two talents of silver, with two changes of clothing, in two bags and got two of his servants to carry them for Gehazi.

When they came to the house Gehazi took the gifts from the men and let them go. He stored the gifts then went in to Elisha his master. Elisha asked, “Where have you been?” Gehazi said, “Nowhere.”

Elisha said, “Gehazi, my heart went with you when the man got down from his chariot to meet you. Is this a time to receive money, garments, olive groves, vineyards, sheep, cattle, male and female servants? It is not. So now Naaman’s leprosy will cling to you and to your offspring forever.” Gehazi went out from his presence a leper, as white as snow.

Naaman: A Story of Grace

So there's the story of how Naaman experienced the grace and providence of God. He was blessed with an opportunity to be cured of leprosy through Elisha the prophet. We've also told the sequel about Gehazi’s error. Now let's see what these events reveal about God’s grace.

When the king of Syria heard about the prophet in Israel, the king should have sent Naaman straight to him with a humble plea for a cure. Instead the king of Syria chose to go over the head of the prophet. Naaman was sent to the King of Israel, with a demand to make the cure happen. The king of Syria was ignorant of the fact kings cannot dictate to God or his prophet.

The king of Israel knew better, but he wasn't handling the situation well. So Elisha cut short the fiasco, calling Naaman to his doorstep. The prophet sent a message out to Naaman telling him to go and dip seven times in the Jordan. Naaman was shocked. He had his own ideas about what should be done and he imagined he could dictate his wishes to the prophet.

Naaman’s servants knew better. They understood the meaning of humbly doing exactly what they were told. So they gently pleaded with their master to so act. He did, and he was cured.

A Similar Case of Grace

Centuries later, there was another great man riding in a chariot. Like Naaman, he was a chief in the service of royalty. He was in charge of all the treasure of Candace queen of the Ethiopians. The story of his encounter with the prophet and evangelist Philip, is told in (Acts 8:26-40).

This man did not have leprosy, a disease of the body. But he was troubled by sin, a disease of the soul. Just as Elisha told Naaman how to be cleansed of his leprosy by God’s grace, so Philip told this man how to be cleansed of sin by grace —through Jesus. This man believed; he did not try to impose his own ideas on God. So he wanted to be baptized at the earliest opportunity, even as they went along the road (Acts 8:36).

No human being (except Jesus of course) can dictate terms of grace. God is the giver. We must conform to his word to be among the receivers. Do you want to do what you want? Well you won't receive grace, for grace cannot be dictated by you.

Naaman went everywhere in style. He had a full compliment of horses, chariots, luggage, soldiers and other servants. When Naaman went to Samaria to meet the prophet of Israel, he also carried silver and gold and new garments as gifts. He, and his king in Syria, supposed that a cure for leprosy would be expensive.

After his leprosy was cured, Naaman went back to the prophet and offered him very rich gifts. But Elisha the prophet refused. The cure was an act of God’s grace and mercy. And grace was free. It would have been inappropriate to accept money and gifts for an act of grace.

“For by grace you have been saved through faith, and this is not from yourselves, it is the gift of God” (Ephesians 2:8.)

“In Jesus Christ we have redemption through his blood, the forgiveness of sins, in accord with the riches of his grace” (Ephesians 1:7).

Another man who offered to pay

Centuries after Naaman, another great man made the same error. He was Simon, the greatest magician in the land. His story is told in Acts 8:5-25.

Simon gave up his sorcery and became a Christian. But he longed to have the ability to impart miraculous powers as the apostles did by God’s grace. So “he offered them money saying, 'Give me this power...'”. Peter scalded him severely “because you thought the gift of God could be bought with money” (Acts 8:19-20).

We cannot contribute anything to grace. Nothing we offer to God, and nothing we do, can pay for God’s grace, no not even the tiniest fraction. If we think we can pay for grace, we insult God. “All have sinned and fall short of the glory of God” (Romans 3:23). Only God, in his grace, by providing the sacrifice of his Son, can make up that shortfall.

This wonderful truth must not be misunderstood. It does not mean that there is nothing for us to do in response to God’s grace. Grace cannot be purchased or earned. But it must be responded to with an obedient belief.

3 Grace Must be Obeyed

The two truths I just mentioned, are often accused of contradicting each other. (1) Grace cannot be purchased or earned. (2) Grace requires a response, namely obedient belief.

The first truth is illustrated by Naaman. He was loaded up with money and gifts in order to repay Elisha for the cure. Elisha bluntly refused and turned Naaman away. Gehazi didn't care to understand the situation. He ran after Naaman and told a lie to get the gifts. Elisha punished Gehazi with Naaman’s leprosy. It's clear that you cannot repay God for his grace.

Naaman illustrates the second truth also. He was required to dip seven times in the river Jordan. That was commanded to be his response to the promise Elisha made to heal him. At first Naaman refused. As long as he refused to respond as commanded, he would not be healed. When he believed what he was told, and obeyed it, then he was cured.

Another man who believed and obeyed

Centuries after Naaman, another man, the great Saul of Tarsus, found that he had to obey God’s word to receive God’s grace (without in the least contributing to the price of grace). He became the great apostle Paul.

In Acts 22:3-21, Paul tells of his experience of Christ on the road to Damascus. Ananias, God’s prophet, came to Saul in Damascus, and healed him of his blindness. But Saul needed his sins forgiven.

Ananias said to Saul, “Now why do you wait? Arise, and be baptized, and wash away your sins, calling on the name of the Lord” (Acts 22:16). By the grace of God, Saul could be forgiven of his sins, if he obeyed what Ananias told him to do.

If Saul had refused, as Naaman refused to obey Elisha, Saul would not have received grace. But when Saul obeyed Ananias, just as Naaman obeyed Elisha, then Saul was washed of his sins just as Naaman was cleansed of his leprosy.