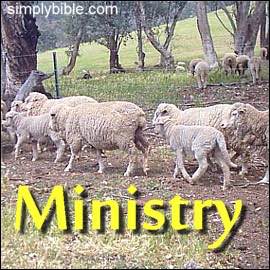 Evangelists
—What are they?

The word “evangelist” is a Greek word which in Anglo Saxon is “gospeler”. The evangelist, simply defined, is a preacher of the evangel or gospel. Both of those words mean “good message”.

Whilst all disciples of Christ spread the message of Christ, it does not follow that therefore all Christians are evangelists. In the original church of Christ only "some" were evangelists (Ephesians 4:11).

So an evangelist is one who preaches the gospel in a special capacity. In this lesson we try to define the role and ministry of the evangelist by considering four questions...

Yes, evangelists are ministers simply because they have a "work of ministry" (Ephesians 4:11-12). Paul wrote to Timothy, "Do the work of an evangelist, fulfill your ministry." (2Timothy 4:5).

The common idea that evangelists should not be called “ministers” is therefore false. Perhaps it stems from the misunderstanding that “the minister” is the boss of a congregation. That is not so. He is a servant of the congregation.

The word “ministry” simply means “service”. The Greek, διακονια (diakonia), may be transliterated as “deaconry”, and translated as “ministry” or “service”.

So evangelists are ministers, but only in the sense that they serve in preaching the gospel.

Among the denominations there is a practice of distinguishing between clergy and laity. A layman is not ordained although he may be allowed to preach. This is not a scriptural distinction and practice.

So in the church of New Testament times, there was no ordination such as is practiced in denominations today. All that happened was that congregations appointed certain ministers to do certain tasks.

So evangelists are ordained, but only in the sense that they are appointed as preachers of the gospel.

In some churches today there is a refusal to make appointments. Every man is regarded as an evangelist and takes his turn at preaching. But, as we saw earlier, God gave "some as evangelists" (Ephesians 4:11).

“Some” does not mean “all”. We also remember James saying that "not many" should be teachers (James 3:1).

This does not mean that we should perpetuate the unscriptural distinction between clergy and laity. On the other hand, nor should we perpetuate the practice of using a “mutual ministry” exclusively, to prevent the appointment and use of evangelists.

No, evangelists are not pastors. In the Greek, the word for “pastor” is ποιμην (poimeen), meaning shepherd. The word “pastor” is related to the word “pasture” and just like the Greek word it also means a shepherd of the flock.

Paul told the elders at Ephesus to shepherd the flock (Acts 20:17,28). He never told evangelists to do so. When Paul wrote to the Ephesians, he made a clear distinction between evangelists and pastors (Ephesians 4:11).

So evangelists are not pastors, and should not be referred to as such.

Yes, evangelists are priests, but no more so than other Christians are priests. Jesus abolished the old priesthood and made all Christians priests under him, the great High Priest (Hebrews 10:19-22, 1Peter 2:4-5, Revelation 1:6).

This is sometimes referred to as “the priesthood of all believers”. I cannot read in the scriptures about any third intermediate level of priesthood inserted between all believers below and Christ the High Priest above.

Evangelists have no special priesthood different or higher than other members of the church.

So evangelists are priests, but only in the same way that all the holy are priests.