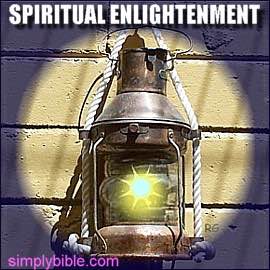 The Revelation of the Light
—Second of a trilogy.

We have seen that God is the one source of spiritual light. Now we look at how this light is transmitted into our hearts. It comes by revelation.

Paul says that everybody lacks spiritual wisdom in their own right, but has only such as is revealed by God’s Spirit (1Corinthians 2:7-16).

"We speak God’s wisdom in a mystery, the hidden wisdom, which God predestined before the ages to our glory, which none of the rulers of this age has understood... but God revealed it through the Spirit" (1Corinthians 2:7-8).

1 God Reveals the Same Light to All People

God does not reveal one light to this person and another light to that person, but reveals the same light and truth to all. He does this through his unique Son.

Jesus said,"I am the light of the world; he who follows me shall not walk in the darkness, but shall have the light of life" (John 8:12).

We follow the true light by believing and obeying what Christ the Word has revealed. "I have come as light into the world, that everyone who believes in me may not be in darkness. And if anyone hears my sayings, and does not keep them... the word I spoke will judge him in the last day" (John 12:46-50).

Jesus was the first to proclaim light.

Jesus was "the first to... proclaim light" to all mankind. That implies that any genuine light previous to him served as a star of hope promising the coming revelation of’Christ.

¶ "The prophets and Moses said... that the Christ would suffer, and be the first to rise from the dead and thereby proclaim light both to the Jewish people and to the Gentiles" (Acts 26:23).

Paul described his ministry as "the preaching of the word of God, the mystery which has been hidden from the ages and generations but now is manifested to his holy ones" Colossians 1:24-29

We shine as one light in the world

Jesus said, "You are the light of the world" (Matthew 5:14-15). We, as followers of Jesus, can be enlightened, and in turn enlighten others.

Paul said, "Prove yourselves to be blameless and innocent, children of God above reproach in the midst of a crooked generation, among whom you appear as lights in the world" (Philippians 2:15).

2 Without God’s Light We are in Darkness

We can only be lights, however, if we shine the one true light proclaimed by Jesus. Following and proclaiming our own light won't do, because our own “light” is really darkness.

Zacharias prophesied that "The Sunrise from on high shall visit us, to shine upon those who sit in darkness and the shadow of death, to guide our feet in the way of peace" (Luke 1:77-79).

Later, old Simeon held Jesus in his arms and said to God, "My eyes have seen your salvation which you have prepared in the presence of all peoples, a light of revelation to the nations, and the glory of your people Israel" (Luke 2:30-32).

3 The Gospel is the Revelation of the Divine Light

This light of revelation is called “The gospel of Jesus Christ”. Paul said that Jesus Christ has "brought life and immortality to light through the gospel" (2Timothy 1:10).

Paul spoke of this gospel as the only source of light and revelation. "The god of this world has blinded the minds of the unbelieving, that they might not see the light of the gospel of the glory of Christ, who is the image of God" (2Corinthians 4:4).

Then Paul said, "For we do not preach ourselves... For God who said, 'Light shall shine out of darkness' is the one who has shone in our hearts to give the light of the knowledge of the glory of God in the face of Christ" (2Corinthians 4:5-6).

When Jesus commissioned Paul to preach the gospel, he said, "I am sending you to open their eyes that they may turn from darkness to light, and from the dominion of Satan to God, in order that they may receive forgiveness of sins and an inheritance among those who have been sanctified by faith in me" (Acts 26:18).