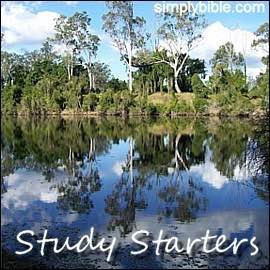 Jesus and the Virtues
—The Christian Virtues Exemplified by Christ

Peter lists eight virtues which he says make us useful and fruitful in the kingdom of God. In this seminal study we look at Jesus as the exemplar of these virtues. For each virtue in Peter's list, we take an example in the life of Jesus that demonstrates that virtue.

Note —SEMINAL: A seminal idea is the germ, seed, or beginning of a concept. It has the potential to unite with other ideas and to grow into something substantial. This page is but an idea: a seed to start you on your own personal study. Take the seed, grow it well and prayerfully. Your study will be fruitful. You need no scholarship, no special skill, and no books but the Bible.

Virtues of our Lord

Jesus fully trusted in his heavenly Father, and showed his complete faith at Gesthemane when he, contemplating his imminent crucifixion, prayed, "Not my will but yours be done"

Jesus lived without sin —a truly amazing accomplishment. He was able to look people in the eye and say, "Which of you convicts me of sin?"

Even in his boyhood Jesus was already able to discuss the law of God and spiritual things with the religious teachers at the temple. They were impressed with the knowledge and insight he had gained though so young.

As Jesus cleansed the temple, he showed righteous anger with great self control. He did not lose his temper. He did not revile, nor yet resile. He acted deliberately with temperance, courage, and authority.

Note —TEMPLE CLEANSED: There were two occasions on which Jesus drove people from the temple. The first is recorded in John 2:13-22, the second in Matthew 21:12-13.

When Jesus was subjected to unjust abuse in corrupt court proceedings, he never retaliated or weakened, but endured with forbearance and long suffering, in contrast to the impatience and outbursts of his false accusers.

Jesus showed godliness in everything, but as one example, on a certain night, in deadly circumstance, at a time for decision, Jesus chose not go to bed. Instead he went off to the mountain where he spent a whole night in prayer.

After his resurrection Jesus appears to his disciples who have spent the night fishing unsuccessfully. Jesus lights a fire by the lake shore and starts cooking a breakfast for them of fish and bread.

On the cross and in agony, Jesus still had thought and care for his mother, and thus showed "the love of Christ" which fills the hearts of all who seek to know him (Ephesians 3:17-19).

(1) As you read about the life of Jesus (Matthew, Mark, Luke, and John), you will find many examples, in his words and deeds, of Christian virtues and graces.

(2) As you read the New Testament letters, you will find many virtues and graces besides those mentioned by Peter. For instance look at Paul’s list in Galatians 5:22. But there are still more. Read to identify personal qualities that God approves, and then try to match them with examples in which Jesus demonstrates them.

By following this line of study, you will be able to produce many deep and edifying lessons with which to feed yourself and the flock of God.