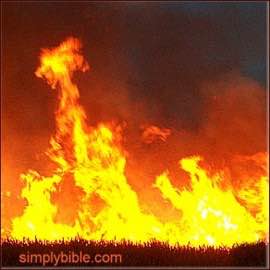 The story of the destruction of Sodom and Gomorrah, referred to by Peter (2Peter 2:6-11), is one of the most sobering true stories of the Bible. It is found in Genesis chapters 18‑19.

Sodom and Gomorrah's destruction happened in the time of Abraham and involved his nephew Lot. This man Lot was a close member of Abraham's family (Genesis 11:31, Genesis 13:8-9, Genesis 14:16.)

Lot was living in Sodom. He was a very righteous man, and Sodom was a very sinful city.

God decided to destroy Sodom and its neighbouring city Gomorrah. However God saved Lot and his family from the destruction. This story has obvious significance as a microcosm of the end of the world (2Peter 3:7,10-11).

Note —MICROCOSM any system that exhibits, on a small scale, the elements and parts of the greater system of which it is part. The destruction of Sodom and the salvation of Lot is a small-scale version of the end of the world.

When Abraham hears God’s plan to destroy Sodom, he pleads with God on behalf of the few righteous who live in the city (Genesis 18:16-33). The Lord appeared to Abraham at Mamre, in the form of "three men" (Genesis 18:1-3).

When they told Abraham of God’s plan to destroy Sodom, he interceded on behalf of the few righteous who may be found in the city. This represents the intercession of Jesus Christ for the righteous of this world (Romans 8:34, Hebrews 9:24, 1John 2:1).

Peter tells us that Lot was "oppressed by the filthy conduct of unprincipled men... his righteous soul tormented day after day by their lawless acts" (2Peter 2:7-8).

We do not know why Lot persisted in living in this city when its wickedness so distressed him. It is most likely that he hoped to turn the people from their evil ways to faith and obedience toward God.

This represents the burning desire of God to bring sinners to repentance, and the suffering which Christ endured to that end (2Peter 3:9, Titus 2:11-14).

3 The City’s Reviling of Angels

Peter mentions the attitude of those who have immersed themselves in sin, "...those who indulge the flesh in the lust of uncleaness and despise authority. Presumptuous, self-willed, they are not afraid to insult angelic majesties" (2Peter 2:10-11).

The people of Sodom surrounded Lot’s house, demanding that Lot send out his angelic guests, so the people could sexually molest them (Genesis 19:4-5). This illustrates how depraved the wicked can become.

Lot, at the angels' bidding, went to his sons-in-law to urge them to escape the coming destruction. But they thought he was joking. (Genesis 19:14).

This represents the efforts which Christians make to bring the gospel to the lost, and how so often it falls on deaf ears.

5 The Sparing of Zoar

Lot pleaded that a small city called Zoar should be spared and that he should be allowed to flee there. The angels were willing and Zoar (which means "small") was preserved (Genesis 19:17-23).

This perhaps represents the principle that God preserves a remnant, as he did later when the kingdoms of Israel and Judah were destroyed (Isaiah 1:9-10).

There is another angle to this part of the story. Lot’s reason for wanting to go to Zoar was, "I cannot escape to the mountains, lest some evil overtake me and I die" (Genesis 19:17-19).

Yet, after the destruction of Sodom and Gomorrah, Lot changed his mind. "Lot went up out of Zoar and dwelt in the mountains... for he was afraid to dwell in Zoar. He and his two daughters lived in a cave" (Genesis 19:30).

Sometimes we want to compromise and still keep just a little of what God wants us to abandon. When God says, "Do not look behind you, nor stay anywhere in the plain, but escape to the mountains..." we are afraid to do it (Genesis 19:17-18).

However, when we come to better understand God’s hatred of evil, then we are afraid to be anywhere near it, and we flee even from Zoar.

Our observations of this story to which Peter has directed our attention, would not be complete if we did not consider Lot’s wife. Indeed Jesus said, "Remember Lot’s wife" (Luke 17:32-33).

This emphasises our previous point. Lot’s wife looked back, even though God warned not to. Her punishment was swift (Genesis 19:26).

After becoming a Christian, it can be hard to abandon our old selves and to not look back with lingering regret at what God destroys. However we cannot compromise.

With God’s aid, we must hasten to a completely new life with our eyes fixed on Jesus (Hebrews 12:1-2), a life in which we are totally committed to "being found by him in peace, without spot and blameless" (2Peter 3:11,14).