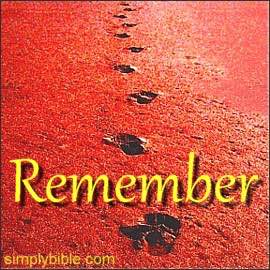 Jesus said, "He who endures to the end shall be saved" (Matthew 10:22). Some people never forget God or depart from him, but endure to the end. Others do forget God and fall away, although some of them, like the lost son, remember God again, repent, and come back to him. This lesson gives some Bible examples of people who remembered and people who forgot.

The Bible has many examples of people who did not forget God. They remembered God even in times of great trial, and they endured. Here are just a few of those examples.

Abraham. Abraham, when his faith was tried, remembered God. He obediently went to sacrifice his only son Isaac in obedience to God, believing that God would either provide a substitute lamb or else raise Isaac from the dead (Hebrews 11:17-19 Genesis 22:1-14).

Noah. Noah, in a world of great wickedness, remembered God and found grace in his eyes. Noah and his family survived the great flood that wiped out all flesh except those in the ark (Hebrews 11:7 Genesis 6:7-8,22, 7:1)

Enoch. For 300 years Enoch remembered to walk with God. That's five times longer than most of us have to endure. God was so impressed with Enoch that he took him up into heaven and he did not see death (Hebrews 11:5 Genesis 5:22-24)

Moses. Moses remembered God and chose to serve him. This was a hard choice for Moses because it meant that he had to suffer with the people of God and endure many trials (Hebrews 11:24-26)

Paul. Paul, remembering that he would receive in the future a crown of righteousness from God, remained faithful, enduring many tribulations (2Timothy 4:7-8, 2Corinthians 11:23-28)

The Bible also has many examples of people who did not remember God and did not endure under trial. In this lesson we look at two men who forgot God (although they did subsequently make things right). We also note two churches that forgot God and hopefully also later turned back to him.

Peter. Peter forgot his promise never to deny the Lord. When he was tested he denied the Lord three times. However he soon repented (Mtt:26:33-75,75).

Simon Magus. After Simon the sorcerer gave up his magic and became a Christian, he momentarily forgot God and sinned. He evidently saw the miraculous gifts of the apostles as a magic power and coveted it for himself. However he repented and asked Peter to pray for him (Acts 8:18-24).

The Church at Ephesus. The church at Ephesus had forgotten the love for Christ that they had at first. They drifted away from it. They were warned to repent (Revelation 2:1-7).

2. Who momentarily forgot God but then repented? (A) Simon Peter, (B) Simon Magus, (C) Both Simons.

4. Who remembered the crown of righteousness laid up for him in heaven, and remained faithful? (A) Judas Iscariot, (B) Paul, (C) Solomon.

5. Which church forgot its first love for Christ? (A) Smyrna, (B) Ephesus, (C) Philadelphia.