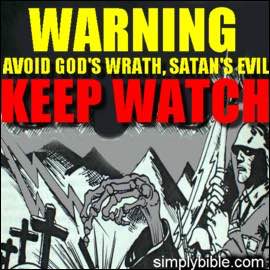 Believing a Lie
—No excuse for being deceived by Satan

Religious lies and false prophets are all around us. People are believing their lies and being deceived. Yes, even as I write this lesson, there is a much publicised prediction that the second coming of Christ will occur at 6pm on May 21, 2011. My concern is that the Bible blames not only the false prophets but also the multitudes who believe them.

¶“3The time will come when people will not bear with wholesome teaching, but will gather teachers to themselves who will tickle their ears as they want them tickled. 4People will turn their ears away from the truth and will listen to myths” (2Timothy 4:3-4).

Why does the Bible blame the victims of the false prophets’ lies? Is it their fault they believe a lie and are deceived? Yes, it is; and for one simple reason stated in the principle below...

Whenever the truth is available to you, there is no excuse for believing any contradiction of that truth.

We see the above principle clearly demonstrated in the garden of Eden. Eve knew the truth; she even quoted it to the devil. He flatly contradicted that truth; Eve chose to believe him. Eve was condemned by God; she was the victim of the devil’s lie but she had no excuse because the truth was readily available to her. She should have listened to the truth and not believed the lie.

At Jesus’s trial there was no lack of willing false witnesses. But their testimony was rejected. Finally, however, two witnesses were produced whose testimony was accepted; although it too was false.

Caiaphas could have examined Jesus and got the truth, but he preferred to get a testimony that suited his own purpose. He was without excuse. He should have listened to the truth from Jesus and not called it blasphemy. He should have accepted this truth instead of the false witness.

3 Many Deceived by Antichrist

Although false prophets arise and deceive many, they can be known by their fruits (Matthew 7:15-16). There is no excuse for believing them. If we take into our hearts a love of the truth we will not be deluded by false teachers (2Thessalonians 2:10).

Many antichrists have appeared (1John 2:18) and the whole world lies in the thrall of the wicked one (1John 5:19-20). Yet the truth is available to all who seek it.