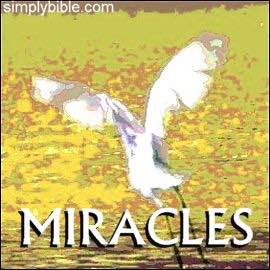 Paul says that spiritual gifts would cease (1 Corinthians 13:8). The question is, when was that cessation to be? Some say at the second coming, others say when the apostles were all dead and the scriptures were complete. Who is right?

"8 Love never ends. As for prophecies, they will pass away; as for tongues, they will cease; as for knowledge, it will pass away. 9 For we know in part and we prophesy in part, 10 but when the perfect comes, the partial will pass away. 11 When I was a child, I spoke like a child, I thought like a child, I reasoned like a child. When I became a man, I gave up childish ways. 12 For now we see in a mirror dimly, but then face to face. Now I know in part; then I shall know fully, even as I have been fully known. 13 So now faith, hope, and love abide, these three; but the greatest of these is love" (1 Corinthians 13:8-13, ESV).

When the perfect comes

In the original Greek, the word translated “perfect” (or “complete”) in verse 10 is an adjective with neuter gender. The noun is not supplied, but is meant to be understood as the completed result of what was provided, part by part, through miraculous gifts —namely the word of God. 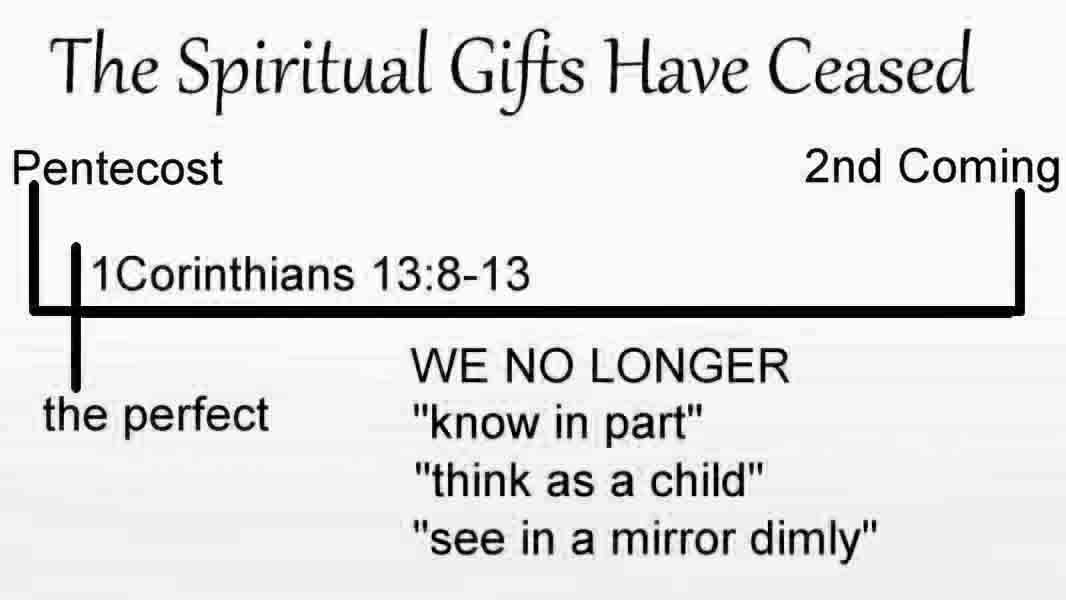 Each “part” of course contributed to a whole. This was the goal of the miraculous gifts. The apostles and prophets furthered this goal by writing their revelations in their letters. Their collected writings provided the whole of God’s word for posterity.

For example Paul says, "By revelation God made known to me the mystery as I have briefly written already, by which, when you read, you may understand my knowledge in the mystery of Christ... revealed by the Spirit to his holy apostles and prophets" (Ephesians 3:3-5).

People claim to have revelations from God today, yet decline to add any these revelations to the scriptures. If spiritual gifts still operate, then God’s revealed word is still “in part”; consequently additions to God’s word are to be expected.

On the other hand, if the word of God is complete in the scriptures, then Paul’s prophecy that gifts would cease has come true, and what passes for miraculous gifts today is a counterfeit.

2 We Are No Longer Children

Paul says that God gave gifts "till we all come to the unity of the faith and of the knowledge of the Son of God, to a perfect man, to the measure of the stature of the fulness of Christ, that we should be no longer children..." (Ephesians 4:13-14).

Paul did not see this maturity as being attained at the second coming, but as a goal close to being achieved: "speaking the truth in love we may grow up in all things into him..." (Ephesians 4:15).

3 We Are Fully Enlightened

"For now we see in a mirror dimly, but then face to face. Now I know in part; then I shall know fully, even as I have been fully known." (1Corinthians 13:12).

Yet this isn't so. Paul said to the Corinthians, "God... has shone in our hearts to give the light of the knowledge of the glory of God in the face of Jesus Christ" (2Corinthians 4:6).

Paul prayed for the Ephesians that God "may give you the spirit of wisdom and revelation in the knowledge of him, the eyes of your understanding being enlightened..." (Ephesians 1:15-18a).

So even back in Paul’s time spiritual gifts were becoming redundant as the light of revelation was shining brighter and brighter.

Things Made to Last

"Continue in the faith, grounded and steadfast, not moved away from the hope of the gospel which you heard, and which was preached to every creature under heaven, of which I, Paul, became a minister" (Colossians 1:23).

That passage shows that the great commission to "go into all the world and preach the gospel to every creature" (Mark 16:15) had been achieved in Paul’s own time.

The signs that followed those who went into all the world (Mark 16:16-18) were given to establish faith, hope, and love in Christ. These abide, but the gifts that established them passed away having achieved their purpose.

It is faith, hope, and love, that will last until the second coming; and love, the greatest of the three, will never end.