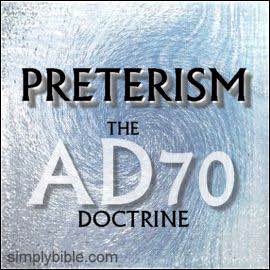 What World Would God Destroy?
—The Heavens and Earth in 2Peter 3

This study deals with the nature of the "world" or "heavens and earth" whose destruction is linked to the second coming of Christ. We are especially considering Peter's prophecy about the heavens and earth being destroyed by intense fire (2Peter 3:1-18)

1 Let's Start With a Riddle

I'm sure you solved the riddle easily. The term "world" is used in different senses. We are all aware that, in natural language, a word may not mean the same thing every time it is used. To understand a statement, one must have regard to the different meanings and usages of words.

Unless we attribute the proper sense to words, we can turn a statement into nonsense, as in the above riddle where God seemed to have done something wrong. You could look at the lesson The Meaning of Words if you would like to know more about this matter.

Those who hold to the "AD70 doctrine" feel that 2Peter 3, being a prophetic chapter, uses language that is not meant to be taken in its natural and literal sense. In their view, Peter should be understood as speaking in a highly figurative manner.

They don't think that he is really speaking of three successive literal worlds in the sense of dwelling places or habitats. Rather, says the theory, Peter is speaking symbolically of three ages or systems, namely the Patriarchal, Mosaic, and Christian ages.

2nd Peter chapter 3 employs a variety of words in reference to the world. Let's note these in the order in which they occur.

4 The Heavens and the Earth in 2Peter

5 The Heavens and the Earth in Isaiah

It is instructive to compare Peter and Isaiah with regard to the heavens and the earth.

Creation of the heavens and earth. We read in Isaiah of the stretching forth the heavens and laying the foundations of the earth (Isaiah 40:22, 42:5, 45:12). The AD70 doctrine does not treat this as symbolic language. Here the term "heavens and earth" is accepted to mean the world that God created for mankind to dwell in.

We note, moreover, that the AD70 doctrine rightly accepts these passages as literal, notwithstanding that there are verses in Isaiah about the heavens and the earth, even its founding and planting, that are poetic and figurative (Isaiah 44:23-24, 51:15-17).

Destruction of the heavens and earth In other passages from Isaiah we read of the vanishing of the heavens and the removal of the earth from its place (Isaiah 13:9-13, 34:1-4, 51:4-8). These passages at once address particular nations and all nations, and make it clear that they are speaking about the whole world.

This new world is what Peter calls "the eternal kingdom of our Lord and Saviour Jesus Christ" (2Peter 1:11), and what our Lord himself referred to when he said, "I go to prepare a place for you" (John 14:1-3).

Peter speaks as Isaiah speaks. His message is the same. It is "the words spoken beforehand by the holy prophets and the commandment of the Lord and Saviour spoken by your apostles" (2Peter 3:2).

Isaiah was one of those prophets. Peter was one of those apostles. Their words are prophetic, powerful, and plain. Today they warn us as with one voice. A day is coming when planet Earth will be destroyed by intense fire and the day of eternity will see a new world. But only those who conduct themselves in the fear of God and surrender themselves to his grace shall enter in.