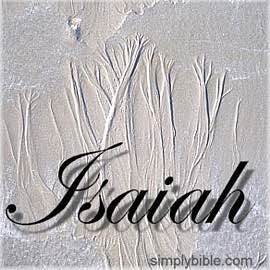 This lesson compares Isaiah 7:14 with Matthew 1:23. We consider the words of Isaiah as quoted by Matthew, "Behold, the virgin shall be with child and shall bear a Son, and they shall call his name Immanuel" (Matthew 1:23).

This is an example of a class of prophecies in the Old Testament which appear to have a dual fulfillment, that is to say they predict something to take place in the near future which symbolises something greater that will take place in the distant future.

In our previous lesson we looked at the near fulfillment of this prophecy in the person of Maher-shalal-hash-baz Isaiah's son . Now we look at its distant fulfillment in the Person of God’s Son.

In some translations the word "almah" in Hebrew is rendered "maiden" or "young woman" rather than "virgin" (Isaiah 7:14). However, the Holy Spirit’s translation (Matthew 1:23) is the Greek word for "virgin" showing that the Holy Spirit approves of, even insists upon, using the word "virgin" (or its equivalent in the language of translation) to render the Isaiah passage when referring it to the birth of Christ.

Isaiah’s son, as we saw in our previous lesson, was born in a natural manner. Ahaz had refused to ask for a supernatural sign. So ironically he received a “sign” that was no wonder, but merely a reminder of coming doom. The Isaiah 7:14 prophecy however, in its distant fulfillment, was to be fulfilled in a miraculous manner, namely by a virgin birth.

Surely this is what one might expect of the birth of the Son of God. We would expect it to be miraculous and wonderful, far more marvellous than a normal conception and birth.

Using a word other than “virgin” makes the Isaiah passage meaningless for the birth of Christ. How could it be a "sign" in the distant future for a young woman to get pregnant and to give birth due to natural causes? It would be impossible to identify the sign if the young woman got pregnant naturally like thousands of others do.

Therefore Matthew, by inspiration of the Holy Spirit, translates Isaiah 7:14 using παρθενος (parthenos), virgin. That is what we sensibly and logically expect, a conception that is miraculous and unique. Nothing less than a miraculous conception would do, if God truly became flesh to dwell among us (John 1:1), and if the child born is truly the Son of the heavenly Father.

It is not too strong to say that if we deny the virgin birth, we deny that Jesus Christ is the Son of God.

The main clue that Isaiah 7:14 has both a near and distant fulfillment, is the child's name. Isaiah was told to call his child Maher-shalal-hash-baz meaning “swift to the booty, speedy to the prey” (Isaiah 8:1-3). The child in the prophecy however was to be called Immanuel meaning “God with us”.

After Isaiah's son was born, Isaiah again prophesied the birth of a child, showing that he did not consider the real child of promise to be his own son, but rather the Son of God. This second prophecy is recorded two chapters further on (Isaiah 9:6-7). A most important element in this later prophecy is the development of the child's name...

"For unto us a child is born,
Unto us a Son is given,
And the government will be upon his shoulder,
And his name shall be called Wonderful Counsellor,
Mighty God, Everlasting Father,
Prince of Peace.

The increase of his government and peace
Shall not end
Upon the throne of David,
And over his kingdom,
To order and establish it
With judgment and justice,
From that time forward, even forever.
The zeal of the Lord of Hosts
Will perform this."
(Isaiah 9:6-7)

It is clear from this second prophecy that only One can fulfill it, the Son of God himself. The name attributed to him here is an expansion of the name Immanuel —“God with us” (Isaiah 7:14, Matthew 1:23). Now such a name is obviously not appropriate for Isaiah's son.