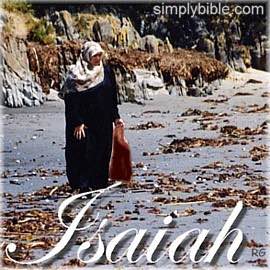 Background to Isaiah
—Page 2, the nations, the divided kingdom

This page is not a lesson as such, but will assist you with your studies of Isaiah, by providing you with some useful background to the book.

David and Solomon ruled not only the tribes of Judah and Benjamin, but also the other tribal territories of Israel, although the loyalty of these was somewhat forced. When Solomon’s son Rehoboam took the throne, the ten territories rejected him and made Solomon’s servant Jeroboam their king instead. He reigned in the city of Samaria.

Thus the kingdom was divided. There were now two kingdoms called Israel and Judah. Israel was the name retained by the ten territories, whilst Judah was the name adopted by the territories (Judah and Benjamin) remaining faithful to the throne in Jerusalem. That is not to say that the ten tribes were disloyal to the last man. Some defections to Judah from other tribes are recorded, for example, in 2Chronicles 15:9.

After a long succession of kings in both kingdoms, the time of Isaiah came. His time was critical because Assyria attacked Israel and eventually carried off its people into exile. Judah however was spared because its king Hezekiah listened to Isaiah’s word.

Nevertheless, Isaiah foretold that Judah would also be taken captive by the Babylonians (Chaldeans), then when Persia came to power and conquered Babylon, a king named Cyrus would help a remnant to return and rebuild Jerusalem. All this came to pass.