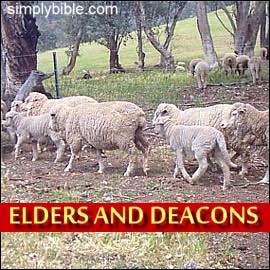 Qualifications of Elders and Deacons
—Part 1

[For the technically minded, in the Greek, we find the impersonal verb dei, which means "it is required". The qualifications of elders and deacons given by God are not just suggestions or guidelines (in the looser sense). They are requirements. Any one who is appointed as an elder or deacon must meet these requirements.]

In one way, the Lord's requirements simplify our selection task. We can immediately eliminate many men from the list of candidates. For example, unmarried or childless men should not be considered for appointment because those appointed "must" be husbands and fathers (1Timothy 3:2,4,12).

1 Qualifications: What is a Must?

In the process of elimination, we should be very careful not to make more of a "must" of any qualification than God himself has made of it. Some have made so many "musts" that it is all but impossible to find men qualified. When the criteria are made so strict that men cannot be found who meet them, then the appointment of elders and deacons becomes an ideal instead of a practical proposition. This is not a technique for ensuring a scriptural eldership. It is a technique for preventing and obstructing eldership.

In City Beach church's paper "Truth in Love" I saw a very sensible and succinct statement along that line....

"...members are being unrealistic and unreasonable if they demand perfection of the men willing to serve as elders. For example, all men who are willing to take the oversight must be able to teach sound doctrine (1Timothy 3:2, Titus 1:9) but some may have more ability to preach and teach than others (1Timothy 5:17). Don't demand that all elders must be "perfect" preachers and teachers. Leave room for the appointed men to grow "on the job". Similarly, the qualities of temperament listed in the Scriptural qualifications for elders will differ in degree and expression between different men. Don't demand "perfection" and "uniformity" in these. There will always be room for men to continue being "built up", after appointment, by continuing to commit themselves to God and to the word of his grace (Acts 20:32)."

The Holy Spirit's directions are quite attainable by Christians generally, and we should not impose a higher standard than has been divinely set. The general thrust is revealed by the question: "Can he take care of the church of God?"

There is a balance to be observed:

2 A Bishop Must be Blameless

Whilst it is right for a man to desire the office of a bishop (overseer), and right for the congregation to respect that desire, it is also necessary for the man to qualify for the office he desires. The general qualification is that he be "blameless". That means that when his life and habits are scrutinised, he is not caught in any sin, and you may take that both ways: He is not caught in sin in the sense that he is discovered or apprehended in some sinful situation or act, nor is he caught in sin in the sense that it has taken hold of him and has him in its grip.

This characteristic should be distinguished from...

On the other hand these different senses in which one may be blameless are connected. The person who is forgiven in baptism goes on to strive to be more Christlike. He admires the perfect example set by our Lord, and diligently applies that example to his life, being conformed to it and transformed by it (Romans 6:4,6, Romans 8:29, Romans 12:2).

The overseers should be chosen from among those who have come a long way in this process, and whose lives consistently demonstrate and exemplify the wonderful change wrought in the life of one who has Jesus in his heart. Such a man is not perfect, but he can be respected for his holiness and godliness, and trusted not to lead astray those who follow his lead. He is such a man that those who follow him will in fact follow Christ, because he himself follows Christ.

In such cases, there is a lack, but it is a lack without fault. The person is still, nevertheless, unqualified. Although it is no fault of his, he does not have what he "must" have to be appointed a deacon or an elder.

It is in the nature of things, that a good man may be falsely accused. Wagging tongues may say he is immoral, a liar, legalistic, self-seeking, or some such unfounded judgment. When people in his congregation hear such rumours and take insufficient steps to set the record straight, they allow the good man's reputation, and the brotherhood's respect for him, to be damaged. This leaves him blamed rather than blameless.

When the scriptures say "blameless" or "not accused" with regard to an elder's qualifications, surely they do not refer to unfair blame, false accusations, or mischief, humbug and gossip. Were that the case, Jesus himself would be disqualified!

When the scripture says, "A bishop must be blameless", it does not mean only that he must be a good man, but also that those who falsely accuse him be exposed and silenced. Until that is done, the man is not blameless, however good he might be, and God will certainly be angry with those who do nothing about it. Part of the process of selecting an eldership, might have to include an honest and open enquiry into, and exposure of, any rumour mongering. The people's attitude may be, "It's his problem not mine, and I don't want to get involved." The man, however, is not in a position to defend himself and so he is unjustly disqualified from eldership. The people therefore deprive themselves of an elder.

The Lord says, "Do not receive an accusation against an elder except from two or three witnesses" (1Timothy 5:19). This is not a special privilege for an elder. It does not imply that we may treat accusations against non-elders, or prospective elders, more loosely.

On this page we paid attention to the degree we should expect when looking at a man's qualifications, and we considered the meaning of the general qualification that he should be blameless.