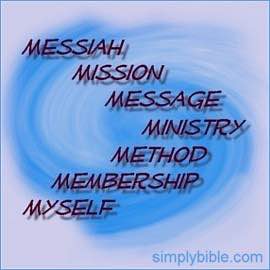 The Second Em: Mission
—A lesson from Colossians

Understanding the Mission of Christ’s church is nearly as important as understanding the Messiah himself. To what extent has the great commission (Mark 16:15) been fulfilled in the 21st Century compared to the 1st Century?. Mmmmmmm...

Note —GREAT COMMISSION: This term is traditionally used for Jesus’s command to his apostles to preach the gospel in all the world to all nations, and to baptize those who believe (Matthew 28:18-20). It is contrasted with the earlier so called Limited Commission of Matthew 10.

1 What Mission Does Christ Command?

There is a certain "hope laid up in heaven" which anyone can know about, if they have "heard [it] in the word of truth, the gospel". This true hope is available wherever the gospel is preached, and the church’s mission is to preach it "in all the world".

2 When Was This Mission Commanded?

The great commission is recorded at the end of Mark. Jesus commanded, "Go into all the world and preach the gospel to the whole creation. He who believes and is baptized shall be saved..."

This command was given early in the first century AD after Christ rose from the dead and before he ascended into heaven. We find the command in two other places (Matthew 28:16-20, Acts 1:8).

Although this command is almost 2000 years old, it still must be obeyed by followers of Christ, because as we as we noted above people need to hear the gospel to know about the hope of Heaven.

3 Was the Mission Ever Achieved?

Paul uses the same words as Jesus used in the great commission. Jesus said, "Go into all the world and preach..." Paul speaks to the Colossians of "the gospel which has come to you, as in all the world".

So in the time between Christ's ascension into heaven and Paul's writing to the Colossians, the great commission had been accomplished. The gospel had been preached in all the world, to the whole creation, just as Christ had commanded.

4 Is the Mission for the 21st Century?

God willed to make his glory known to the nations in the first century, and his will was done. His will has not changed. He still wants the nations to know and understand the "hope of glory" in the 21st century. And there is still only one way to do it.

Although Paul said the mission was achieved, he also makes it plain that the mission must be maintained. "And we proclaim him" says Paul.

So we must keep on preaching and teaching and urging, so that the message remains in all the world for "every man" on earth to hear, believe, and obey. While ever people are coming into the world we must proclaim Christ’s message to them.

Let us "pray that God may open up to us a door for the word, so that we may speak forth the mystery of Christ" and when God answers that prayer let us be found "making the most of the opportunity". This is our mission.