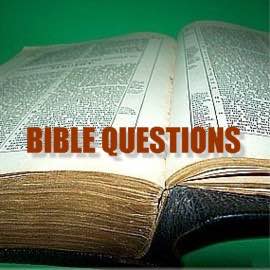 Bible Questions
—And lessons to answer them

Touch or click a question to go to a lesson that will help you find the answer.

➤ What helps to stop bad language? —Thanksgiving Living. An important part of prayer is thanksgiving. The Bible says thirteen surprising things about the gratitude attitude.

➤ Why is Jesus called “The Morning Star”? —The Last Words of Jesus (Revelation 22:6-21). Looking at the final words of Jesus recorded in the Bible.

➤ Why don't people use the Balm of Gilead? —Is There No Balm in Gilead? Why do people not come to the heavenly physician for spiritual healing? Three possible reasons.

➤ What values did Moses believe in? —Adventures of Moses. Moses is the link between the time of bondage in Egypt and the time of wandering in the wilderness. He is the one whom God raises up to lead the people to freedom and toward the promised land (Exodus 1-14).

➤ What makes sin so serious? —The Seriousness of Sin. The Bible is not legalistic, but it does take sin seriously. We look at the basic facts on which the doctrine of sin is built.

➤ In what sense did Jesus lead captivity captive? —He Led Captivity Captive (Eph 4). We examine whether Christ descended into Hell. Who were the host of captives that he led captive? Where, when, and how did he lead them?

➤ What name did God bestow on Jesus Christ? —Is Jesus Jehovah? In this lesson we ask whether Jesus has a right to God’s name: Jehovah or Yahweh.

➤ Did God abandon Jesus on the cross? —Seven Utterances on the Cross. This study considers seven short sentences that Jesus uttered during his crucifixion, including “My God, my God, why have you forsaken me?”.

➤ Can numerology be used to interpret the Bible? —Numerology in the Bible. A discussion and explanation of spurious magical number systems related to Biblical interpretation.

➤ Did God ever elect someone and later reject him? —Election and Rejection. The principle of ELECTION or DIVINE CALLING is a major thread running unbroken through the whole story of the Bible. It is important for Christians to understand how this principle relates to human choice and responsibility.

➤ Is the new covenant a law with penalty? —How was the New Covenant Instituted? It was instituted by God unilaterally. God did not negotiate it with man, he mediated it to man. Its outcome for each person (grace or wrath) is dependent on whether the person keeps it or disobeys it.

➤ What is the foundation of marriage? —What God Says About Marriage. Marriage is a “holy estate” instituted by God who created man and woman as equals to complement each other. Love is the first principle of marriage, where the husband sacrifices himself for his wife, and the wife submits herself to her husband. In holy matrimony, the two become one flesh with God’s blessing. Marriage is for life, and nothing but death should separate the married man and woman. God hates divorce. This lesson looks at those points about marriage.

➤ What was special about Gaius’s love? —The Well-beloved Gaius. The 3rd epistle of John says four wonderful things about Gaius.