Ezekiel Chapters 4 and 5
—Outline and Notes

In this lesson, we outline and analyse the 4th and 5th chapters of Ezekiel. Ezekiel enacts the siege of Jerusalem as God instructs. God describes the coming judgment and destruction.

Israel was a great nation in the time of the kings David and Solomon. But in the time that Ezekiel and Jeremiah were prophesying, that was a dim memory. The kingdom of Israel had been ransacked and captured by the Assyrians. Only the separate kingdom of Judah (Benjamin included) resisted the Assyrians. Its capital was Jerusalem

Then came the Babylonians (or Chaldeans) who overthrew the Assyrians. They took away captives also. As God speaks to Ezekiel, Jerusalem was soon to be destroyed. God allowed all this disaster because Israel had turned away from him. 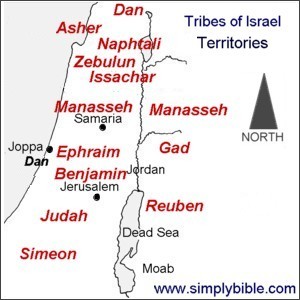 2 Outline of Ezekiel Chapters 4 and 5

The Destruction of Jerusalem Portrayed

3 Notes on Ezekiel Chapters 4 and 5

A Model of Jerusalem

Ezekiel is to make a model of Jerusalem under siege. Ezekiel is instructed how to interact with the model so as to prophesy by action the coming judgment on Jerusalem.

Ezekiel is to place an iron plate between him and the model city, as a wall of iron, to show that the siege will permit no escape, and God will separate himself from Jerusalem during the seige.

Ezekiel is to bake a small quantity of mixed grain barley cakes. These will be his food for hundreds of days and will be strictly rationed, as will his drinking water. In this way the coming privations in Jerusalem are foreshadowed.

Ezekiel must use a single bowl of meal in making the cakes. This must last for the 390 days and then for the 40 days. That symbolises the shocking scarcity of food to be suffered. (However I assume that, for Ezekiel’s sake, his cakes will nevertheless daily be replenished by God).

Ezekiel was to use dried human dung as fuel to cook the cakes. This symbolised that the people of Israel in exile would eat unclean bread among the nations. (At Ezekiel’s request God substituted cow dung for human dung.)

Ezekiel is to shave his head and beard with a sharp sword and divide the hair by weight into three parts. After the specified number of days he will use the hair ceremonially to foreshadow Jerusalem being burned, its citizens slain all around it, or scattered in exile.

However God will rescue some hair of the third part (thrown to the wind), and Ezekiel will tuck a few strands into his garment, to foreshadow a remnant of the Israelites preserved by God, even though further attacked.

Lying on His Side

God required Ezekiel to lie down facing the model of the siege —on his left side for 390  days, and on his right side for 40 days.

This was the toughest part of the enactment. Ezekiel still had to prophesy oracles to the people whenever God spoke to him. It was a long⁠-⁠term commission to be suffered. It symbolised God’s longsuffering down through hundreds of years of rebellion.

Ezekiel was to speak only as God moved him to. God did not want Ezekiel to add any words of his own. So God made Ezekiel's tongue stick to the roof of his mouth, except when God spoke to him and told him what to say.

God restrained Ezekiel with ropes while he was lying on his side, so that he could not turn over. This represented Israel and Judah under judgment from which there was no release.

Ezekiel had one arm free, presumably so that he could manipulate the model and shake his fist at it while prophesying against it.

The periods of 390 and 40 years are definite periods, indicating that God has been paying attention to the rebellion and keeping a record. But why God chose these particular durations as significant remains something of a mystery.

God’s dissatisfaction with Israel would cover longer periods, but perhaps mercy and forgiveness, or previous punishments, lessened the years he was counting.

4 Day Means Year Theory (An Aside)

It is often asserted, even taken for granted, that in prophetic Bible passages a day means a year.

In order to support this day-means-year theory, certain verses are taken out of context on the ground that God "hid" them in the text of the Old Testament as clues to decode times in prophecy. The texts are: Leviticus 25:8, Numbers 14:34, and the one in this lesson, Ezekiel 4:5-6.

There is no warrant for misapplying these scriptures to change symbolic days into literal years.

Attempts to correlate the symbolic numbers in visions mathematically with actual length of the times and seasons they represent causes a great deal of confusion.

5 For Reference: Israel and Judah’s Kings and Prophets