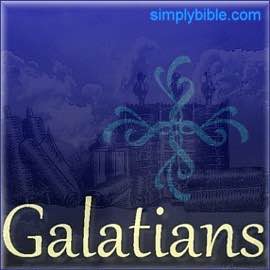 Not Under Law
—the underlying Issue in Galatians

Paul makes this statement "You are not under law" to the Romans as well: "Sin shall not be master over you, for you are not under law, but under grace" (Romans 6:14). It is a wonderful statement, however it is greatly misunderstood. The aim of this lesson is to help us understand what it means.

1 The requirement to “fulfill the law of Christ”

Compare Paul’s statement, "you are not under law" with another statement Paul makes in Galatians 6:2, "Bear one another’s burdens, and so fulfill the law of Christ". Now obviously that means at least this much: Christ has a law, and we must fulfill it.

Paul regarded himself as "not being under law myself... though not being without the law of God, but under the law of Christ" (1Corinthians 9:20-21).

"You are not under law... fulfill the law of Christ"

It is not hard to see how these two statements harmonize, when you put them side by side like that. What that clearly means is that you are not under any obligation to somebody else’s law, you are free from that now, so go ahead and fulfill the law of Christ and don't let anybody bind upon you any other religious, moral, or spiritual law.

Clearly, when we claim to be set free and no longer under law, we do not mean to say that we can disobey Christ or count ourselves as under no obligation to him! Rather, we mean that he has set us free from obligation to another master and to another law which offered us nothing but death. Instead he made himself our Master to obey, and his law offers us no less than eternal life.

2 The freedom of enslavement to Christ

Now let us think about the idea of enslavement which Paul introduces at the beginning of his letter when he calls himself "the bondslave of Christ" (Galatians 1:10). Paul discusses this fully in the Romans passage we mentioned at the start of this lesson. That passage says,

¶“14[If you present yourselves to God as instruments of righteousness] sin will not be master over you, since you are not under law but under grace. 15What then? Shall we sin because we are not under law but under grace? No, never! 16Don't you know that if you yield and obey as slaves do, then the one you obey claims you as slaves? You are either slaves to sin, leading to death, or slaves of obedience to Christ, leading to being judged by God as righteous” (Romans 6:14-16).

Like we said in our first point above, We must not make Paul contradict himself. Paul says, "Christ set us free" (Galatians 5:1) and yet, as we have seen, he calls himself "the slave of Christ" (Galatians 1:10) and tells those set free from the law of sin and death that they too, like him, are the "slaves of righteousness".

Again, Paul expects us to put these two statements side by side and harmonize them:

"Christ set us free... we are slaves of Christ"

Imagine you were enslaved to a terrible master who cursed, condemned, and punished you, but offered you no means of finding favour and forgiveness. You lived in hopeless misery under him.

You nevertheless regarded yourself as free, because your new master loved you more than himself, treated you as his own brother, willingly forgave your wrongs, and helped you to follow his will. He did not lay heavy burdens on you, and he rewarded you with gifts beyond anything you could imagine.

You are his slave, but you quite properly regard him as having set you free. This is what Paul has in mind. By becoming Christ’s slave, we escape the condemnation and curse of laws pertaining to our former enslavements.

3 The Freedom of Faith

Finally, we need to connect the statement, "You are not under law" with faith —we have not mentioned faith in this lesson till now. Paul says, "As many as are under the works of the law are under a curse" (Galatians 3:10). Then he explains why that is so. "The law is not of faith" (Galatians 3:12).

Paul means that those who tried to be justified by keeping law without faith in Christ were doomed to failure. This is the "law alone" doctrine. But some people turn that around and teach the "faith alone" doctrine. Paul however taught no such thing. He taught "faith working through love" (Galatians 5:6). Let's put those two statements side by side...

"Works of law are under a curse... faith works through love"

Now on both sides of that comparison you can see there are works —on one hand, works without faith, and on the other hand, works that belong to faith and which are done through love. The latter works are the works commanded by the one in whom we have faith —Jesus Christ.

The principle that Paul espouses is not lack of works because a lack of good works cannot be righteousness (Galatians 6:9-10). The issue is a lack of faith. Works without faith condemn and curse. Works of faith save and set free. The answer is to put faith behind the works —faith in the Christ who is behind the law that faith obeys.