The Prophecy Clock
—Was the restoration of Israel postponed?

We have noted how premillennialists claim that Old Testament prophecy is “literal” and predicts events in our daily newspapers and in our immediate future. This claim leads to a distorted understanding of the restoration of Israel.

It is claimed that there was a “parenthesis” in history —a period unintended and not prophesied— because Jesus at his first coming failed to restore Israel and establish his kingdom.

The theory asserts that God had to stop the “clock of prophecy” and postpone the prophesied restoration of Israel for around 2000 years until Christ’s second coming.

The kingdom of Israel had been a mighty empire in the time of king David and his son Solomon. But later there was only a remnant1 of the kingdom left. Yet, among the prophets of that time, there was hope of a restoration.

Here is a small sample of their prophecies...

The hero of Israel who would bring about this restoration was the Messiah (Daniel 9:25).

Note —MESSIAH: The two titles, Messiah and Christ, are synonymous and interchangeable. “Messiah” is the Hebrew for which “Christ” is the Greek equivalent.

When Messiah came, he did not set up David’s throne again in Jerusalem on earth. People might have thought that Messiah would conquer the world in a political or material sense, and establish an earthly kingdom of the same nature as the kingdom of David and Solomon. But that didn't happen, nor was it meant to.

The prophecies were to be fulfilled by a greater heavenly kingdom. Where the prophets described the kingdom in material terms, they were speaking figuratively and symbolically:

Note —ISRAEL: In this lesson I do not imply that the physical remnant of Israel ever ceased to exist, or that it could never achieve nationhood. But whatever its fortunes may turn out to be in God’s providence, the earthly nation of Israel never was, and never will be, the Messianic kingdom established by Jesus.

3 Prophecy Was Fulfilled On Schedule

Peter says, "David was a prophet, and knew that God had sworn to him with an oath to seat one of his descendants upon his throne. He looked ahead and spoke of the resurrection of Christ" (Acts 2:25-36).

Peter understood, and claims that David understood also, that the kingdom of Israel would be restored at the resurrection and ascension of Christ. 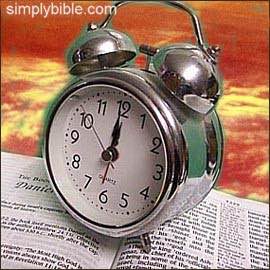 4 God’s Clock Did Not Stop; Jesus Did Not Fail

In this lesson we are examining whether Jesus brought the kingdom prophecies to fulfillment. Did he fail to become a king like David? Did he really restore Israel, or was he a king without a kingdom? Jesus had taught his disciples to pray, "Thy kingdom come" (Matthew 6:9-10). Did their prayer fail?

Peter says, "David was a prophet, and knew that God had sworn to him with an oath to seat one of his descendants upon his throne. He looked ahead and spoke of the resurrection of Christ... exalted to the right hand of God" (Acts 2:25-36).

We rejoice in this fact that Jesus ascended into heaven. But wasn't he meant to restore the kingdom to Israel and rule the world from Jerusalem on the throne of David? It was all very well for him to go away into heaven, but what of the kingdom prophecies he was supposed to fulfill?

One has a clear choice. Either Jesus set up a different kind of kingdom —a heavenly or spiritual kingdom not of this world— or else he failed and had to postpone setting up his kingdom.

These are the only two ways you can go when confronted by the fact that the kingdom, which the prophets said would come, did not come as a political and material empire.

Without those notions, the fulfillment of most Old Testament prophecy could not be brought into our generation. It would be placed in the first century instead of the twenty-first. There would be no grounds for the complex end-time teachings of premillennialism.

6 Stopped Clock Theory is Unknown in the Bible

The difficulty with the stopped clock theory is very simple: Old Testament prophets nowhere even hint that Jesus would fail to establish his kingdom at his first coming. If he failed, it was a failure unforseen.

The Old Testament prophets forsaw both the death of Christ and the establishment of his kingdom as being two facts consistent with each other. There is no sense among those prophets that God’s predetermined counsel would be frustrated.

For example, Isaiah says, ¶ "A child will be born to us, a son will be given to us, and the government will rest on his shoulders... There will be no end to the increase of his government or of its peace, on the throne of David and over his kingdom, to establish and uphold it with justice and righteousness, from then on and forevermore." (Isaiah 9:6-7).

Nor do the apostles of Christ seem to have noticed any postponement of God’s plan. They speak only of its fulfillment. Many places in the New Testament speak of the kingdom as a then-present reality..

For example, Peter in his speech on the day of Pentecost, claims that it was "by the predetermined plan and foreknowledge of God" that Jesus was taken and crucified. (Acts 2:23).

Peter then claims that the oath that God swore to David "to seat one of his descendants on his throne" was fulfilled by means of "the resurrection of Christ" (Acts 2:29-32).

The whole sense of Peter’s sermon is that Jesus was victoriously "exalted to the right hand of God" who made him "both Lord and Christ" to reign on the throne of his kingdom (Acts 2:32-36).

Jesus therefore was not forced to retreat and try again another day some 2000 years later. He did not need a second chance. He did it the first time. He established his kingdom, and sat down on the heavenly throne, just as the prophets said.