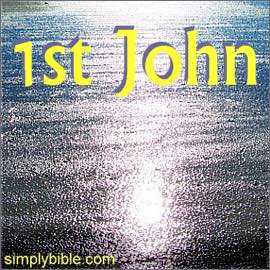 Faith is the Victory
—What John says about Faith

In this lesson, we examine what John says about faith.

1 Faith is the victory

2 Faith must be confessed

"Every spirit that does not confess Jesus is not from God... whoever confesses that Jesus is the Son of God, God abides in him and he in God" (1John 4:3,15).

John however does not recognise a third camp. To John, the person who "does not confess" is in the same camp with the one who "denies". Those who are not for Christ are against him.

3 Faith is based upon true testimony

"God has borne witness concerning his Son. The one who believes in the Son has the witness in himself" (1John 5:7-10).

True faith does not arise from within yourself, rather it comes by taking into yourself the witness that God has borne by his word (cf Romans 10:17).

The only person who has a true "witness in himself" is the one who has got it from the external witness borne by God to and through apostles like John (1John 1:1-4; 4:14).

4 An obedient faith assures us of salvation

John has a very black-and-white view of obedience: "The one who says, 'I have come to know him' and does not keep his commandments is a liar. Whoever keeps God’s word, in him the love of God has truly been perfected" (1John 2:4-5).

So entwined in John’s mind are faith and obedience, that he regards faith itself as a commandment to obey: "And this is his commandment, that we believe in the name of his Son" (1John 3:23-24).

Faith that pushes obedience into second place is not true faith at all.

"This is the confidence (faith) which we have before him, that if we ask anything in line with his will... whatever we ask we receive from him, because we keep his commandments and do the things that are pleasing in his sight" (1John 3:22-24).

As you can see, this does not mean that faith alone makes prayer work, and we don't have to do anything except believe and then we will get whatever we ask. No, first our prayers have to be "according to God’s will" and second we have to "do the things that are pleasing in his sight". Faith then makes prayer work.

You will observe that John’s thinking seems to go in circles. These circles are very wonderful. They are the opposite of those "vicious circles" that often we get caught up in.

The circle shown below is an example. 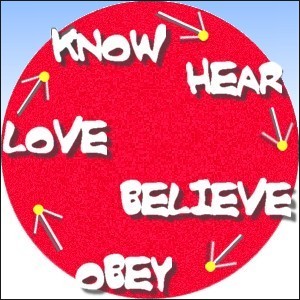 Anointing from the Holy One

John’s reference to "an anointing from the Holy One" (1John 2:18-27) is often taken to mean a personal miraculous inspiration received directly from the Holy Spirit.

However, John explains what he means by this anointing. It was "what you heard from the beginning" (1John 2:24).

False teachers were bringing a new and different message. John is reminding people that they have already heard the truth from the beginning, and it abides in them still, as their anointing from God. They do not need anyone to teach them a new and different "truth".

When you learn the truth from God’s word, that is your "anointing from the Holy One" and you should ensure that it "abides in you" (1John 2:24,27).